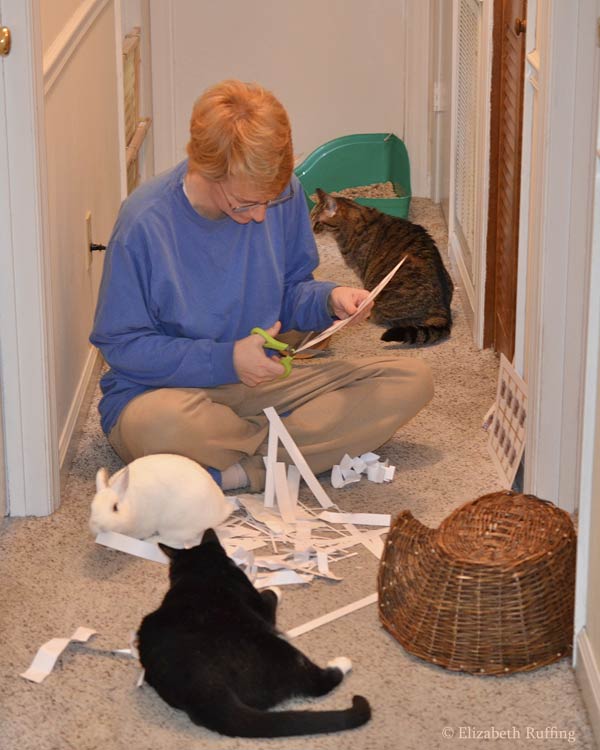 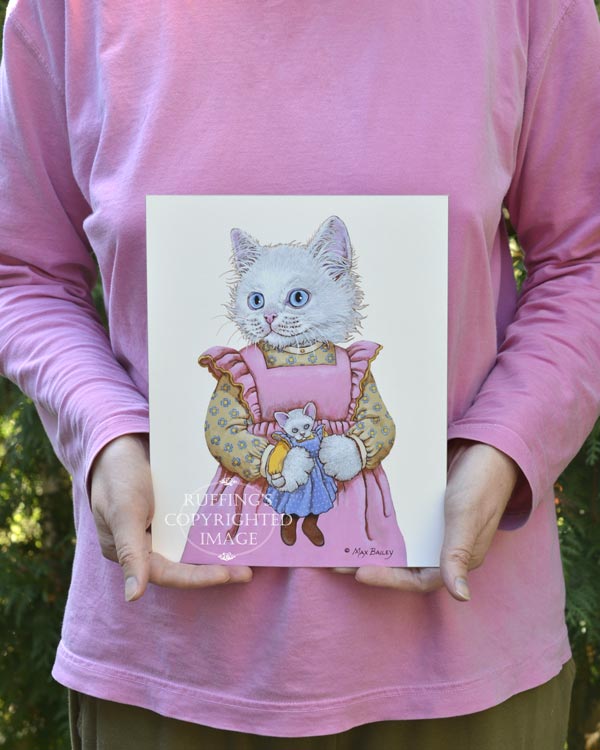 I posted the first two anthropomorphic kitty cat art prints by Max Bailey over on our Ruffing’s art blog, and in our Ruffing’s Etsy art shop yesterday. These are “Alice the White Cat” and “Louisa the Himalayan Cat“, two girls in pink dresses.

Please go have a better look at them. I think they came out really pretty. I finished editing and printing another today, which I will post soon, and we have a bunch more to add. I’m doing so many revisions, trying to get them just right, that we are going to have to order more ink today. 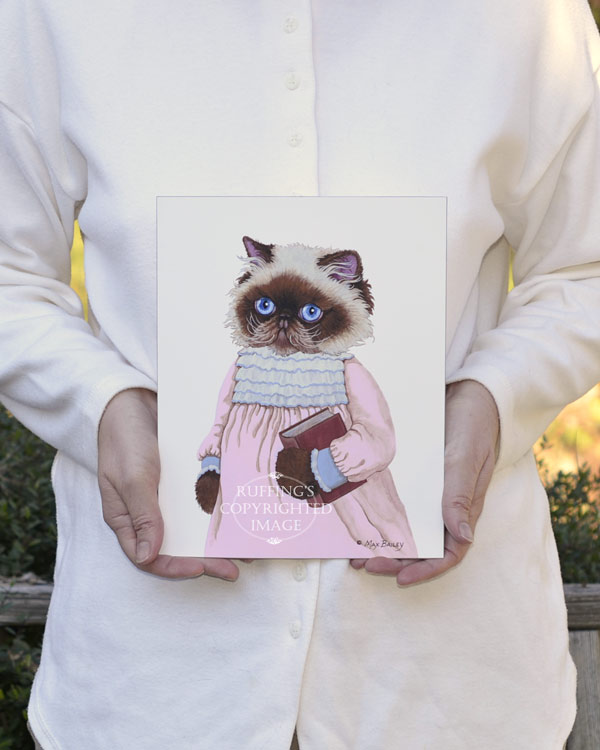 I am back to doing as much work as I can do each day. I enlisted my crew of kitty and bunny helpers yesterday, while I trimmed address labels and miscellaneous stationery.

Oliver Bunny likes to pick the scrap papers up in his teeth and move them around for me. When I stop petting him, sometimes he tries to pick up one of my fingers with his teeth, to make it move again.

We were surprised early yesterday morning, after getting an email saying the power company wasn’t coming to mark the lines in our yard, by a phone call at 7:15am. It was the guy who marks the lines, calling from our driveway. So, I went out, got some flags to mark the power and phone lines, and we picked up a tree too. My tree-planting project is back on track, as soon as the temperature goes above the thirties, provided I have the energy.

We also just set up cataract surgeries for both of my parents. That will be four trips to the hospital for surgery, and eight follow-up exams. That feels like a lot to get through, but it would be wonderful if they could both see again. Their vision has been terribly impaired, which makes a lot of things difficult. I warned my mom that she will have to trim some labels and stationery and prints once she can see. She said she would be happy to be able to see to do it.

I stuffed some Hug Me Slugs and worked on their bottoms this morning. I picked up some pretty new colors last week. Right now I am working on the ones I have sewn and trimmed already, but I would love to add to the colors. I have lots of fabrics that aren’t sewn into bodies yet. I keep going until I get too tired.

My insomnia is still a problem, but I did stay in bed last night, mostly because it was too chilly to get up. Sooner or later, my sleep pattern will have to even out.

In a recent blog postI was talking about how I became self-conscious about talking about myself in my blog, and I said that I was relieved that a couple of people were no longer reading it. I hope I didn’t offend anyone by saying that. I realize people sometimes think I am talking about them, when I mean someone else, since I don’t like to identify people, unless it is to say something nice, or warn other people about them. I feel like I should clarify that a little. I meant a couple of people I knew, one who was negative about things I was trying to do, who was hanging around, but had disappeared. I also mentioned being shaken by an experience with someone I went out with five years ago. That person’s mom read my blog, the whole thing, and so I never mentioned him, in part because he didn’t want me to, but also because I didn’t want to upset his parents.

His sister had, at that time, befriended me on Facebook, and his mom used her account to read what I said there too. His mom knew me better than he did, and would tell him everything I said. She would ask him who people were in photos I posted on Facebook, and correct him when he said something about me and she knew otherwise. He told me she had a crush on me. She had a photo of us together, which she hung up, and he told me that was the first time in his life he made it to the refrigerator door. I decided to think of her as a fan. I thought she must have been getting some enjoyment out of reading about what I was doing.

Her husband was in the final stages of cancer when I went out with their son, and he passed away two months after we broke up. Their son had been staying with them on the other side of the country, and moved here to be near me, although I did not ask him to. He frightened me, and when his sister wrote to me to tell me their dad had died, she said she understood what I did was best for my own happiness. I sent my sympathies, and told her I hadn’t said anything because I didn’t know if they knew what had happened. After I stopped communicating with him, he ordered a bunch of my toys, one or two a day for weeks, for friends and family, with gift notes, some that mentioned me. I didn’t know if he was trying to make amends or if he wanted to give the impression we were together because he didn’t want to upset the people close him. It made me more uncomfortable, and I worried for a long time that he was going to show up again, even though I told him not to. I said nothing about any it, not on my blog, not on Facebook, not to most of my friends.

Then, after posting about how people were no longer reading my blog, I looked his mom up last week, and found out she passed away two months ago. I felt sorry and sad about it, thought of expressing my condolences to his sister, for the family, but then thought better of it. I am sure I am of no interest to them now, which also means no one will know who I am talking about. So, it seems strange to say it here, but I hope she rests in peace. I never spoke to her. I did get a call from her Skype account once, after I’d broken off communication, but I was too alarmed to answer it. Still, I saw her show up on my feed for a long time, and I feel like I should say farewell somehow.

Communicating over the Internet can be strange and awkward sometimes. I’m trying to talk about my life again, and not just post my finished work. We’ll see how that goes.