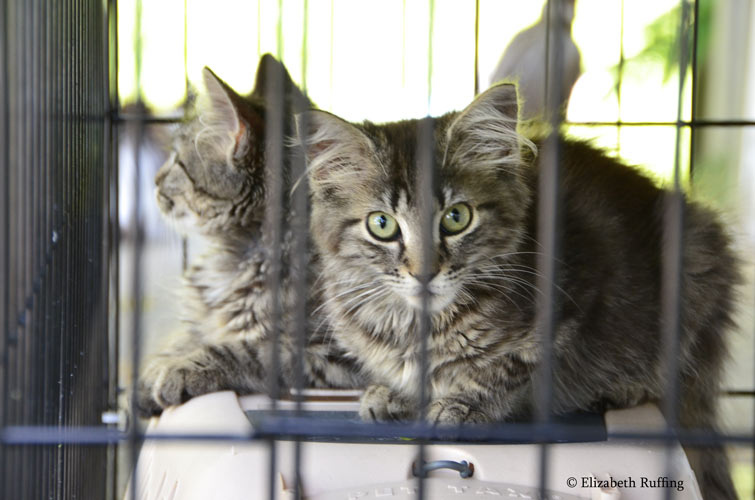 What a week. I’ve been very busy, and I’ve been trying to fit in some sewing. Guess what? We have two kittens here. Meet Phoebe (left) and Bertie (right), or at least those are they names I’ve been calling them, guessing at their genders. They are temporarily in a big dog cage on our deck, getting used to being around us, as they are, so far, feral, and waiting to visit the vet. Bertie is a play on birdie, as they are both like caged birds this week.

Last week, while out in the evening, we saw a kitten, running around a busy parking lot. I got out of the car, and tried to get the kitten, who kept running under cars. The kitten looked fuzzy, and, I thought, about eight weeks old. At that age, kittens have a good chance of taming, and becoming adoptable. So, I borrowed two safety traps from a local cat rescue, thinking I could put one on either side of the dumpster that was nearby, but was flanked on either side by roads. I thought I could put the kitten at less risk for crossing running in front of cars that way. 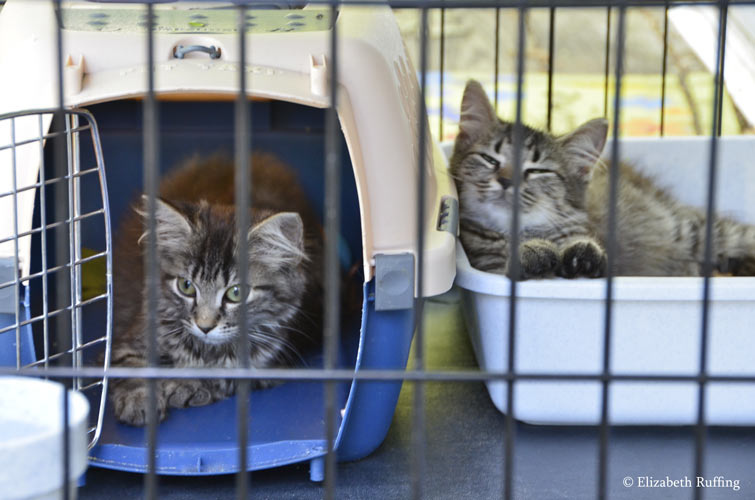 I was amazed that I was able to even find the kitten again, in the dark. I saw her from a distance, running into some bushes near a restaurant. I grabbed the traps, and set one up on either side of the dumpster there, while the kitten watched me from a few feet away. I couldn’t believe my luck. She hopped on top of the trap, then jumped inside. Wow, easy.

Only immediately, another kitten appeared, trying to get in the same trap. I moved the second trap behind the dumpster, and he jumped right in too. By then, some of the employees had come out, and one helped me secure the trap by holding the flashlight for me. It was very dark behind the dumpster, which had a fence behind it. They told me there were at least four kittens and a mama cat. Oh no. The boss was okay with having them there, but none had any shots or had been spayed or neutered. The kittens had just recently begun running around the parking lots as well as crossing the busy road. I brought the kittens home, hoping they would be young enough to tame. 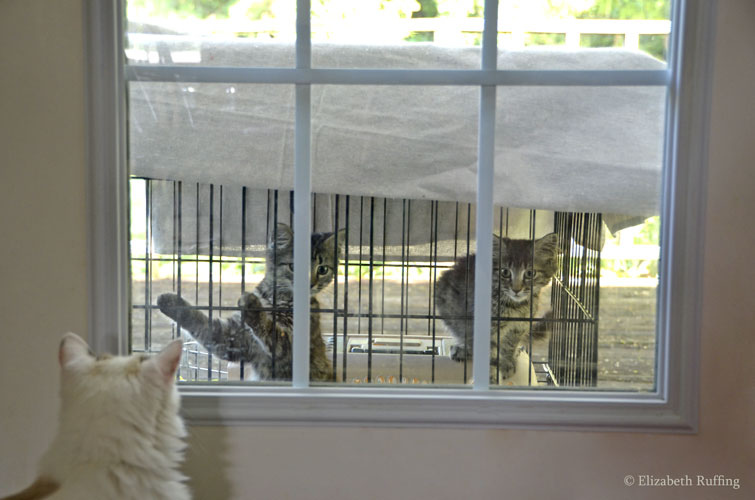 Marie came over as soon as she could, and guessed they were closer to ten weeks old, which created a dilemma…At twelve weeks they can go have their vet work done, because they’ll be old enough for their rabies shots. That’s two weeks here to wait for vetting, with no idea if they will tame. Without being tame, they can’t go into the rescue’s adoption program. Marie brought over the big dog cage, and set everything up for me, which I really appreciated, as did the kittens. They did not like being in the safety traps at all.

The kittens are a lot of work, and still aren’t at a point where I can touch them. I found a very informative three-part video on taming feral kittens, and I hope some of the tips will work for us. Part one of the video is here, and part two here, and part three here. 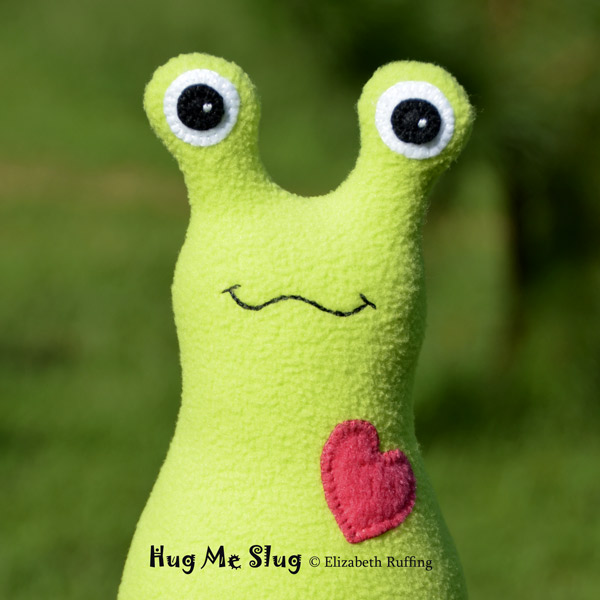 In between running here and there, cleaning up after the kittens, and moving them from one area to the next, to keep them comfortable outside, I have gotten a little sewing done. Here are a few new Hug Me Slugs. I will be posting my new handmade stuffed animal toys in our Ruffing’s shop. 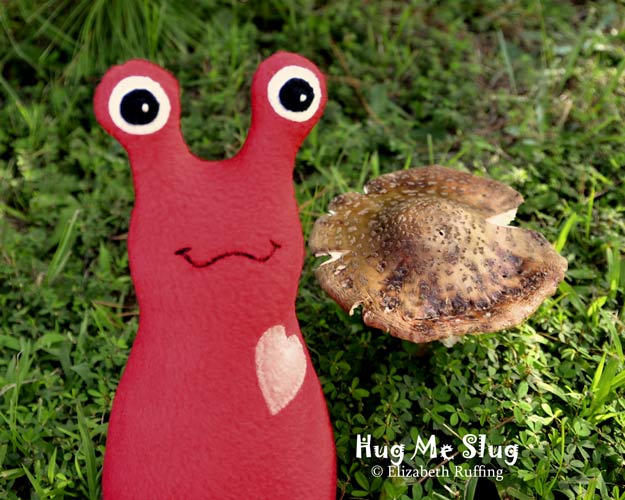 I’m hoping to settle into more of a routine, and get organized in regard to the new arrangement, so I will be able to get more done. Not knowing quite what to do about the kittens has been stressful, since they need to be checked out before they can come inside, and it is hard to get them to socialize much while they are outside. At least they seem to be very healthy, and they are relaxing, playing, and eating like kittens should. I have no idea how long it will take them to tame, or if they will decide they would even like to be tame. It does seem however, that they will decide! 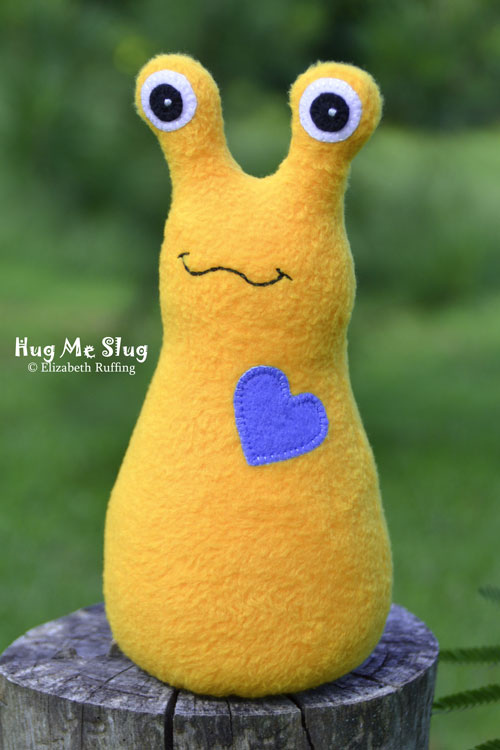 In the meantime, I am looking forward to getting back to some sewing and repopulating my Etsy shop. I know it is now the time of year when I need to get moving, or I will miss out when the holidays come around. 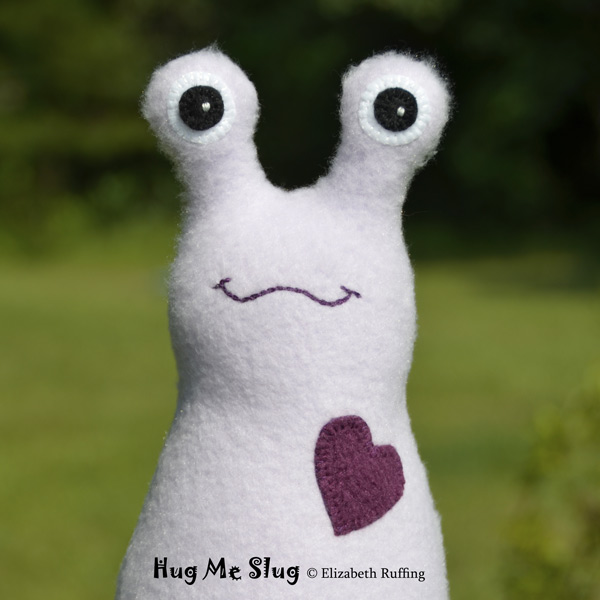 Hopefully this weekend and coming week will go smoothly, and peacefully for everyone. 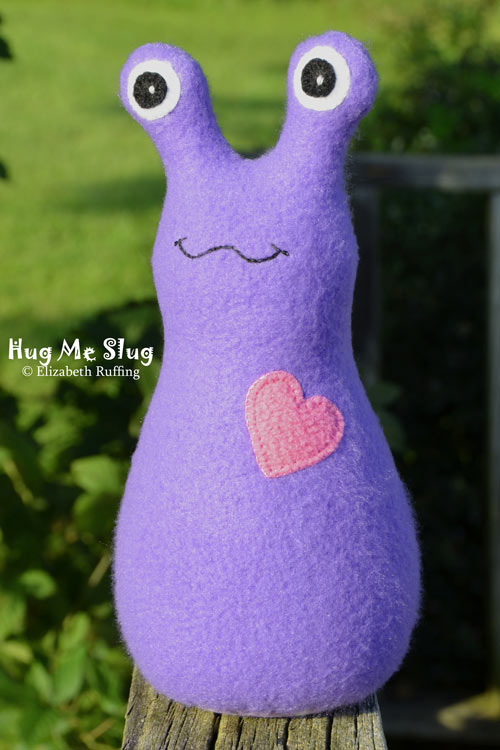 Update: These kitties were not tame enough to go to adoption events, and so…they are now our pets. They have adjusted very well and are enjoying life as house cats.