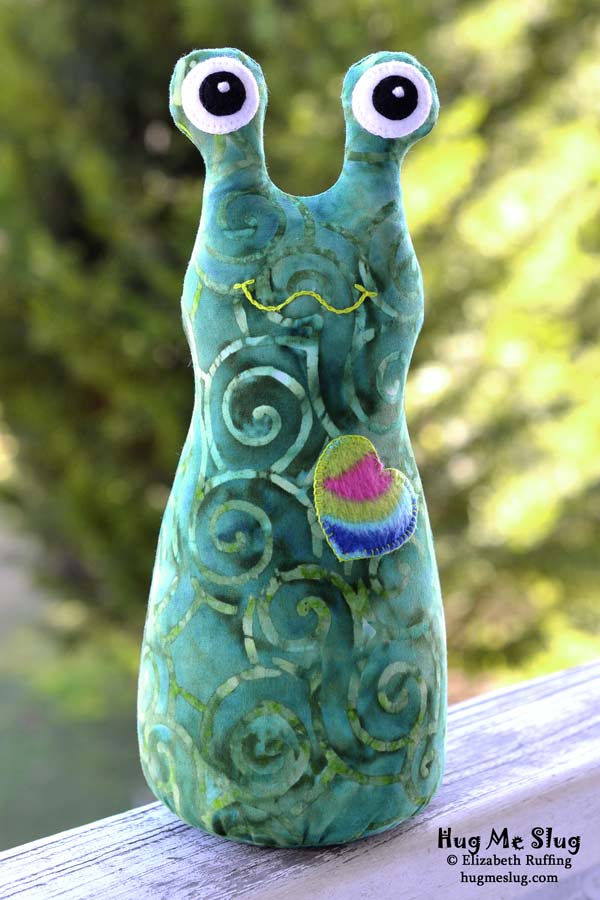 I had a request recently for another batik Hug Me Slug. A customer adopted three of them, three years ago, for his three nephews. Since then, he has gained a forth nephew, who keeps trying to steal “Sluggy” from his brother, who loves him too much to share. So, we needed another slug to come to the rescue.

I made a test slug first, the one above, who is over in my toy shop at the moment, although someone just wrote to say he’d make a perfect birthday present for his daughter. I wanted to make sure I had the same pattern, since I have adjusted my patterns since then.

I sent him some photos of batiks to choose from and then made the one above, with a pretty apple green fleece heart. He is on his way, and I hope he restores peace on earth.

I also posted the fleece Hug Me Slugs I had ready, in all different colors, orange, yellow, purple, watermelon, red,

I had another special request for a Hug Me Slug with a headband. A man wanted him for his girlfriend, who was organizing a marathon. He had to be an athletic slug. I wasn’t sure how that would work, since slugs don’t have foreheads. I managed to attach it over his eyes. He called him a “little runner slug” and I added that to the hang tag.

I am plugging away in Slug Land. Oliver Bunny loves to come running in when my workroom door is open. He sits in the hallway like a couch potato, but once the door is open, he is in there, well, quick as a bunny. I caught him on video, getting excited about running inside, dashing in and out.

The menagerie have been keeping me busy. These are members of my kitty fan club, below, who, when they are free, wait for me on the borderline between our house and theirs. Sometimes they get impatient and come over.

Santana has been being so good about going to the back step and sitting there, when I ask him to, which I do, when the cats come closer. He has had too many squabbles and injuries. Last weekend, I thought we were doing great. The cats all came over, while I was walking Jude, and everyone seemed to be getting along. Trouble and Santana even went exploring together in the back yard. No problems. I was happy and thought they were finally making friends.

The kitty crowd even watched me set up our laser Christmas light, which must have been even more exciting for cats than a laser pointer. They were sitting in the driveway, staring up at the tree I had “decorated”, admiring it.

Then, the next morning, I heard cat noises. I jumped out of bed, ran out in my pajamas, and Trouble and Santana were in the driveway. Santana was badly hurt, three deep, cringeworthy punctures under the base of his tail (I will spare you the photo I took to get a better look). Ouch ouch ouch. I felt terrible. I found fur next to the back step, where I taught him to go when the cats came over. That made me extra sad, since he must have been trying to be good. Trouble had a little blood on his leg, but he appeared to be okay. I checked him over as best I could and didn’t see anything. He may have been coming to look in the back door, or maybe he thought it was fun to sneak up on Santana, who didn’t think it was fun, again. I don’t know.

Santana was bleeding a lot, and seemed to be in a bit shock. I called his mom and we flushed out the wounds. He went to the vet for a Convenia antibiotic shot. He was shaken for the first day, and tired, but the next day he was in a good mood. He is doing well now, and has even come up with a new game to play with me. He hides between the railing and the bushes by the back step, and waits for me. He jumps out when I come up the steps, and meows, like he is saying, “Surprise!” I wonder if he learned that from Trouble, who likes to sneak up and jump. They seem to do okay during the times I am around, but when I am not, in the early morning before I get up, and in the evening when I am inside and busy, are when the problems happen.

The cats are closed up for now, and no one seems to be home next door. Santana is probably happy about that too. I hope a cat sitter is coming this time. I haven’t seen one, but I can leave some food if I have to. I kind of feel like I am taking care of animals in every direction sometimes. I start when I get up and I am still doing it until late at night, while trying to fit work and errands in between. I did get another tree planted though. Go me.

I will post about my Spoonflower fabric samples in a separate post, since this one has already grown so long.