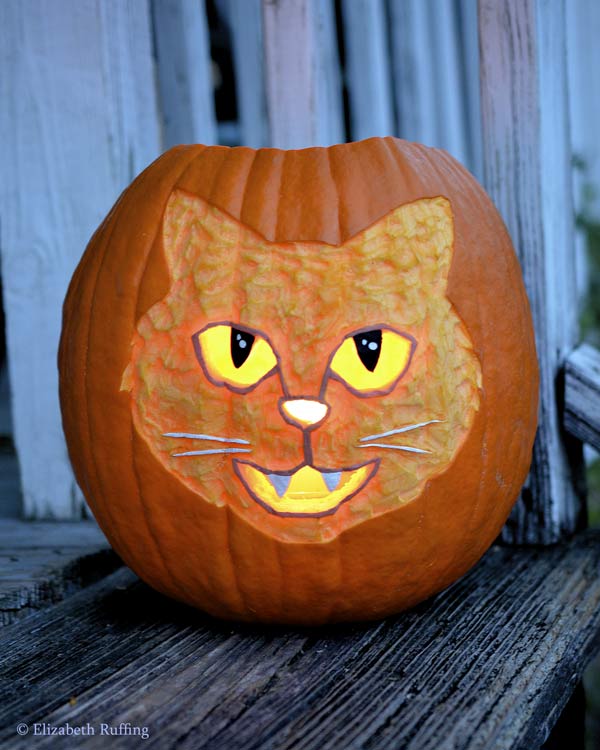 Boo! I don’t think I had carved a pumpkin for Halloween since high school, maybe college. Santana’s mom gave me one, and the day before Halloween, I decided to give it a go.

I sketched a quick template on paper, folded it in half, and cut it out, so I could trace the lines onto the pumpkin with a pencil. Then I used whatever I could find to carve it, a steak knife, an X-Acto knife, and a little stabby knife of undetermined categorization.

First, I “drew” the lines with the X-Acto knife. Then I chipped the surface away where I wanted yellow, with the X-Acto knife. Then I used the steak knife and the stabby knife to cut all the way through where I wanted the holes. I cut the top and scooped out the inside when I was done cutting. I made a bit of a mess, but filled in the lines and pupils with some acrylic craft paint.

I set an emergency candle in a cat food can, first dripping a little wax into the can to get the candle to stand up. Santana kept the cat pumpkin, which was made in his honor, company while we had trick-or-treaters.

We had the best Halloween in years here, only about fifteen kids, which is more than usual, but they had great costumes. One family came with the mom and baby as astronauts, and the dad as the universe. He was all in black, with white lights across himself, so as he held the baby, the baby appeared to be floating through the sky.

One adorably baby lion tried to crawl up the steps. I met him halfway with the bowl of candy.

My favorite was a little superhero, maybe three years old. He had seen the Corgis at the previous stop, and wanted to know if we had any animals he could see. I told him I had a bunny rabbit. He looked incredulous, and said in a surprisingly low, gruff voice, “I wanna see the bunny rabbit.” I showed him Oliver, through the safety of the door, and they were both very curious about each other. The superhero made all kinds of grimaces. I’m not sure he believed Oliver was real, until Oliver reached out his head for a better look. That got a hilarious grimace and a big bizarre pirate laugh. I was still laughing the next day.

I took apart all those pajamas I got on clearance, and fleece throws this week. They are now pre-washed and folded, waiting for me with about a gazillion other lengths of fleece. I was going to try creating a design and ordering some Spoonflower fabric for toys, but thought, since I have so much fleece, I would try having them print eyeballs instead. I made up a repeat pattern in Photoshop Elements, and uploaded it to their site. It was straightforward, once I got the dpi of my image to 150 at the size I wanted.

I got my fat quarter in the mail this morning, printed on their Minky fabric. It looks pretty good. There is a small amount of stretching of my circles, near the edge. I don’t know if the black is as black as I might like, but the dye seems to have saturated the surface pretty well. That was my biggest concern, that white would show through the black. I am pre-washing the fat quarter right now, putting it through my usual steps. I will see how it comes out, once sewn on some slugs.

I think the printed eyeballs may be more consistent in shape and pupil placement than the ones I make by sewing the black onto the white. I don’t want them to lose their charm, but they will probably continue to be wonky enough for my satisfaction. 🙂 I may need to interface the backs so they don’t wiggle too much as I sew them on by hand.

This is the current group of Hug Me Slugs I am working on. Thank you all for continuing to leave me such nice reviews. Aside from helping me out, those cheer me up. Getting appreciation back is great and helps me keep going, making things. It can be hard, working in a bubble of sorts, from home, so those mean a lot to me. I have been feeling better than I have in a while. Got to go get back to my sewing!