I made a quick video of my Viking Platinum 775, in its current state. I’ve been trying to get it repaired or replaced. My phone number and email address have been lost or misplaced by both the original seller and the repair technician, so far. The one is sure the other can fix it, but since this is how it is behaving after it came back from being repaired, I would feel better about it being replaced. The seller doesn’t have any more at this time, but he says he’ll look for one “just in case”. I feel like we’ve already reached “just in case” myself. The machine has been out of commission since October of 2009, after just 11 hours and 53 minutes of actual sewing time. I’m concerned about sending it all the way across the country again, risking additional damage in transit. I’m also thinking, since a lot of the malfunctioning it is doing is entirely random, that, even if someone gets it “working”, that doesn’t mean it will work the next time I turn it on. What if it works for a day, or a week, and then goes haywire again?

And another sampler, from when it came back from repair. It does sew the stitches sometimes: 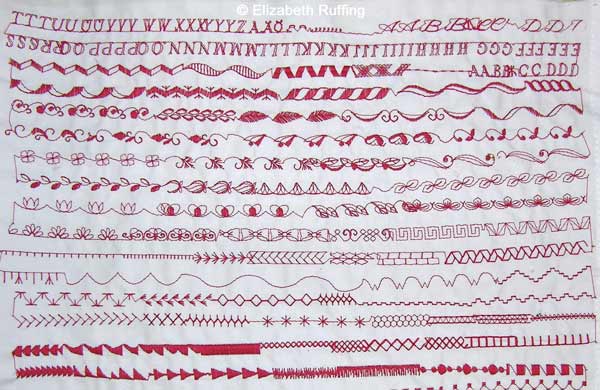 You can see that, in the video, I’m just getting some helter-skelter sewing instead. I think I chose an “A”, “R”, and “X” for the letters I sewed in the video. They came out like chicken scratch. Here’s the sample from the video: 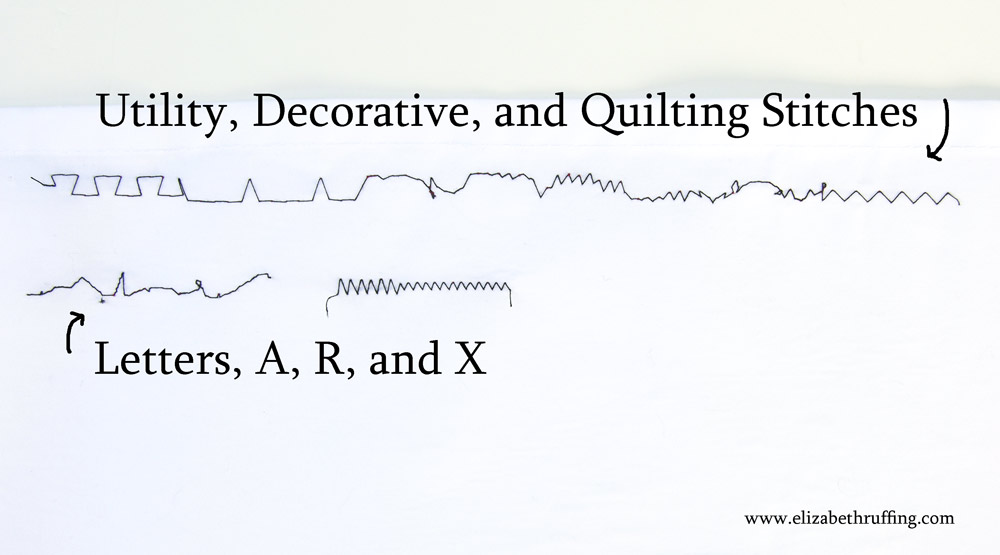 If I turn the machine on and off, sometimes it will still sew the stitches I select. Other times, it won’t. At random, the needle will go off to the right, or the stitch length and width won’t come out as programmed. It’s just not a whole lot of fun.

I’ve never had such a long, drawn-out ordeal over the repair of a piece of machinery. It wears me out. I know it is just a machine, but I dread having to deal with anyone or anything else in regard to it. Can you imagine taking a small appliance to someone for repair, and having to wait so many months to get it working? Imagine if your washing machine started acting up, and and you had to go do your wash at the laundromat for 8 months. Or if you had to rent a car for 8 months while you waited for yours to be repaired. Imagine if no one, the manufacturer, the salesperson, or the repair technician, acted like that was a big deal. Imagine if it took 2-2 1/2 months just for the company to mail out every part they discovered needed to be replaced. It’s just absurd. I’m glad I bought a backup sewing machine from Sears. I hope it never has any problems.