My workroom is getting very full! I took this video last week, and now there are at least twice as many art toys in progress, squeezing me into the center of the room. 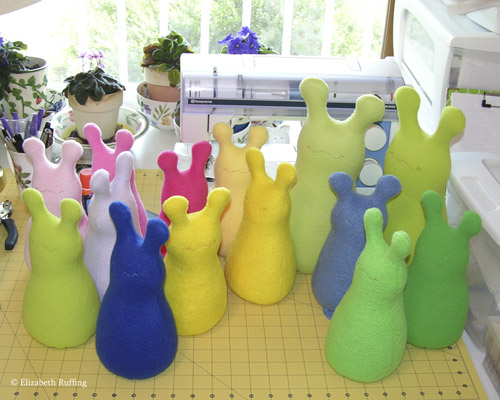 I received such a nice email from a lady who purchased a Hug Me Slug for her daughter’s eleventh birthday. She said her daughter gave her a list of ten things she wanted for her birthday, and a Hug Me Slug was number one! Not only that, but iPod was number two! She told me I beat the iPod out. How cool is that?

I will be posting my new handmade stuffed animal toys in our Ruffing’s shop. 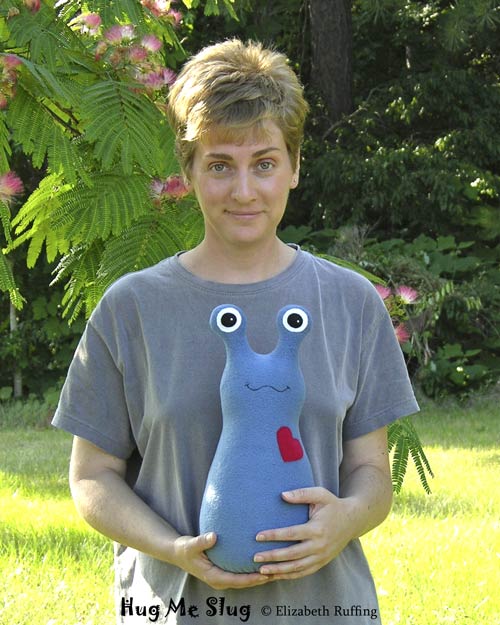 For some time now, I’ve been meaning to make a big Hug Me Slug for my cousin, who is still battling peritoneal cancer, and who has been unable to eat for weeks now. I found it hard to do, I guess because I felt so sad about the whole situation. I sent this blue guy out and I hope he gives my cousin a smile. 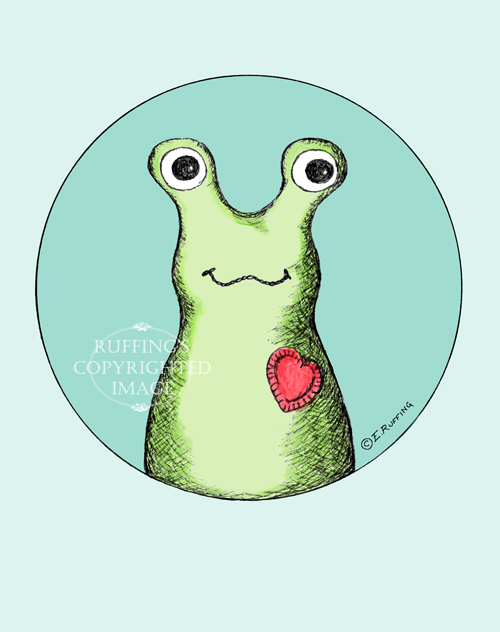 Over the past two weeks, I have been stuffing toys by the bunches, mostly in the smaller sizes, but I stuffed one extra in the 12-inch size, for no one in particular. This Friday, I received a request for a custom 12-inch Hug Me Slug, and in the color I had just happened to have chosen. From the gift note, it sounded like the Hug Me Slug was for a seriously ill person. I checked and it was indeed for a baby, who was potentially going into the hospital this weekend, and who may need a bone marrow transplant and chemotherapy. I am so glad I had that slug ready! I will be able to get her out right away on Monday. I hope that little girl gets all well very soon, and I hope her new friend gives her some comfort.

I wanted to make a special card for her. I digitally colored the card above, using Painter and Photoshop Elements. This is one of my first efforts. I am still very much uncoordinated with the Wacom tablet and pen, and I still feel lost when I open Painter. I was pleased I was able to sign my name with the pen! I still have trouble even staying in the lines. I wanted a card that was simple, that would appeal to a baby. I hope to make more pictures for kids, once I get the hang of this. 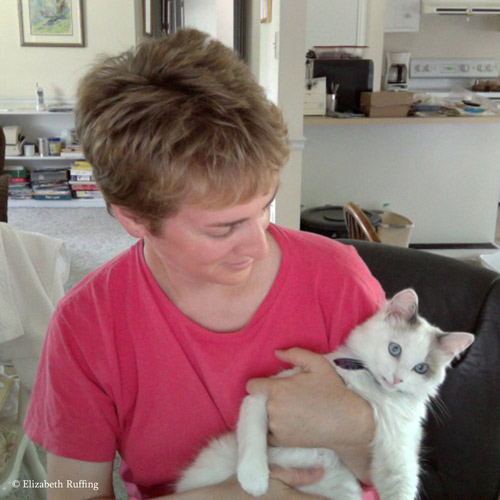 Josephine has been helping me in every way she can. She tried to take my Wacom pen away many times. She still takes all my pens, turns on the Wacom tablet, and jumps on the keyboard. She even tries to call people on Skype! 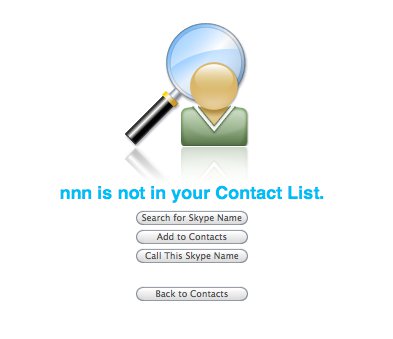 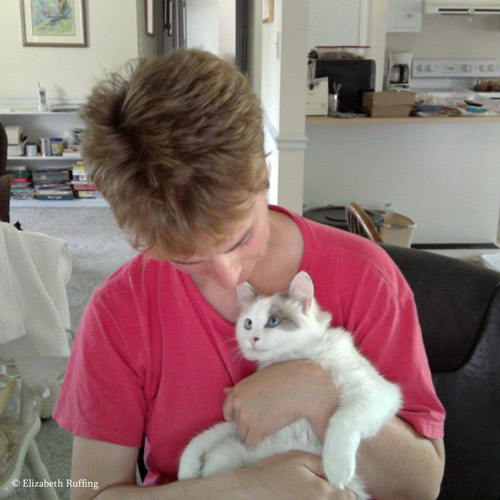 Marie, who is fostering Jack, brought him over for a visit. Jack is doing very well. He played in his carrier, with a fresh catnip knot I made. 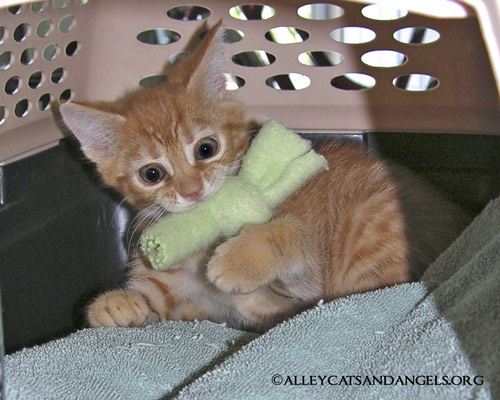 He’s been healing up nicely. 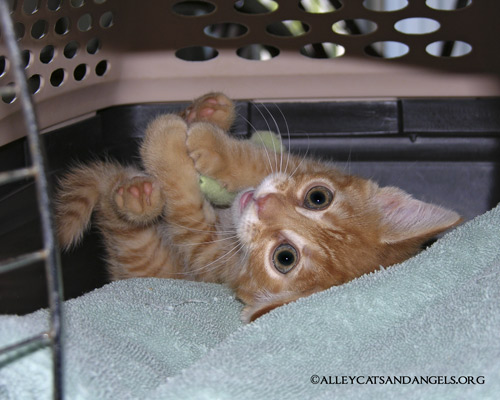 Eventually, he wanted to come out and play too. He had just had his leukemia test, which came out all clear. So, he was able to run around with the other cats. 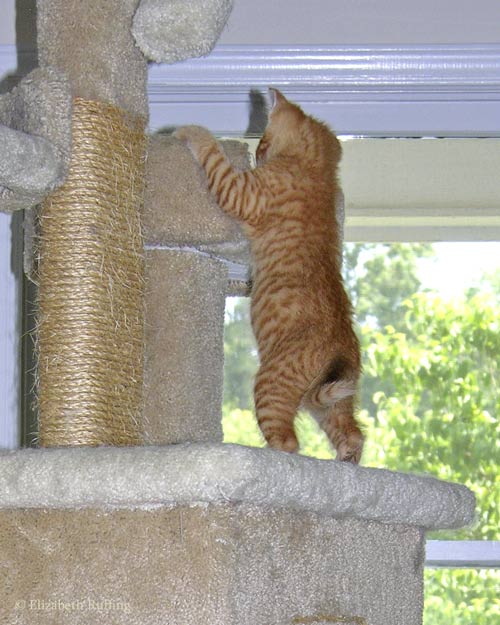 Once he discovered the Bigfoot cat gym, he was obsessed. Jack loves to climb! That’s not surprising, considering I found him living in a tree. 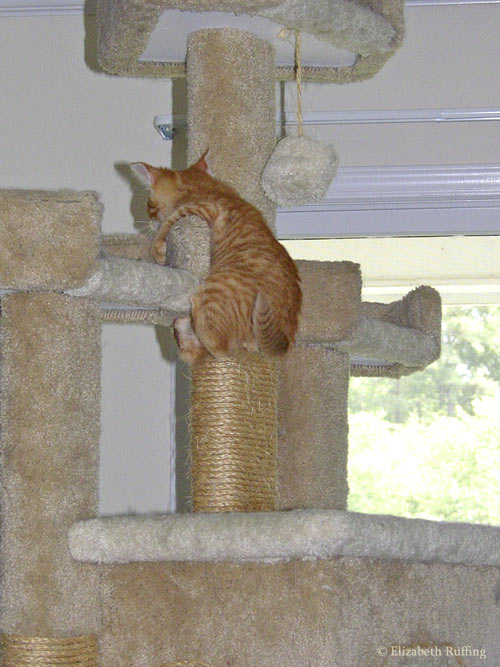 He was determined to make it to the top, as small as he is. 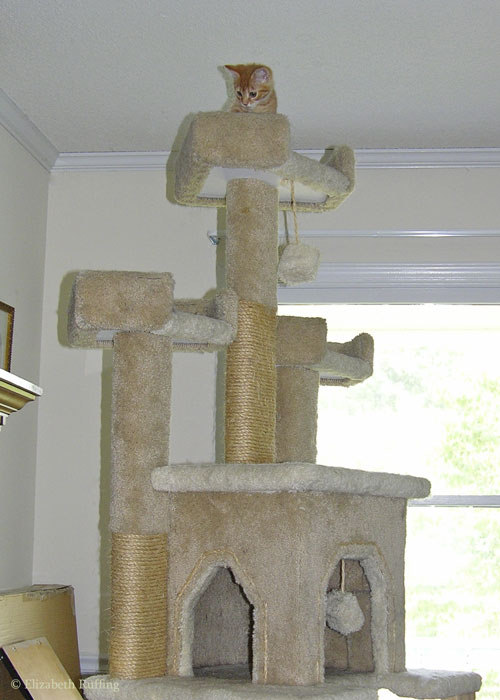 Of course, he made it, because he is a go-getter. 🙂 I hope he gets his own cat tree in his new home, once he is adopted. Marie is still taking care of him, and he’s still got that stitch to get, to reattach his lower lip, but he’s been doing great. Update: Jack has been adopted.