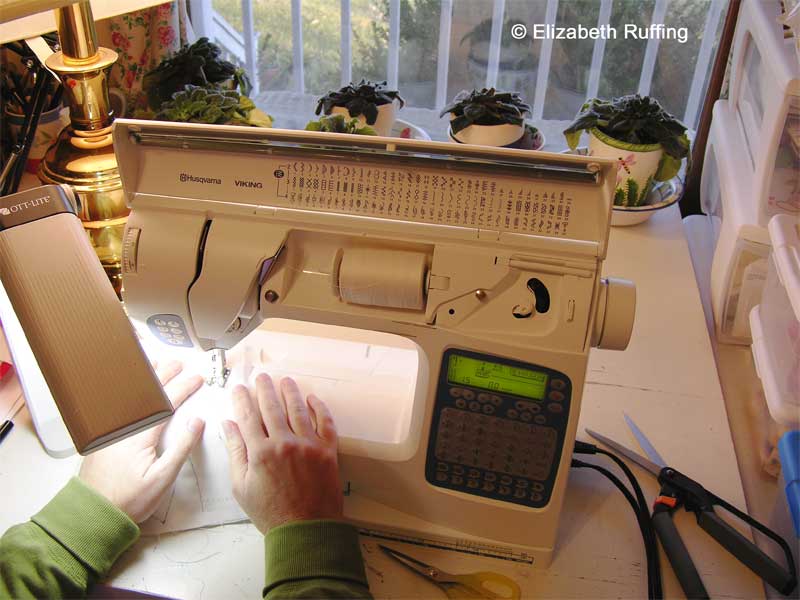 I started sewing our kitty doll bodies today on my new sewing machine. I’m still getting used to the buttons I need to push instead of dials I need to turn. So far, it’s great. I really like the “fix” button that ties the thread off, and the “needle up/down” button, which I used a lot when I was pivoting around tight corners. I borrowed my mom’s Ott-Lite and put it right over my fabric so I could see better. The newer machines have stronger lighting, but that’s okay. It worked out fine. Incidentally, I hate that I look like I have big, old man paws in that photo! Foreshortening does some odd things. 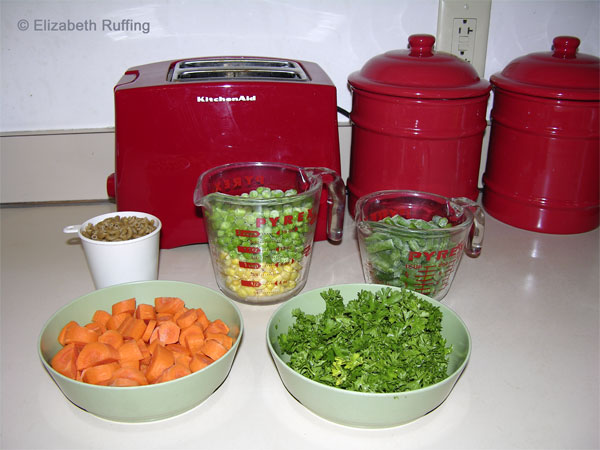 We were so cold today that it seemed like a good day for some homemade soup. I made some vegetable soup using a hodgepodge of ingredients. I had some stock I made and put away in the freezer maybe two years ago! I thawed it out and everyone told me it tasted fine. None of us have come down with botulism yet. So, I think it was okay too. I added a can of diced tomatoes and a little chopped onion and garlic, and then I put about five cups of other vegetables into the boiling stock, about a cup each, adding them in order according to their cooking times. I used fresh carrots, fresh parsley, frozen cut green beans, frozen peas, and frozen corn. I also added a cup of whole wheat macaroni, and some salt and pepper. 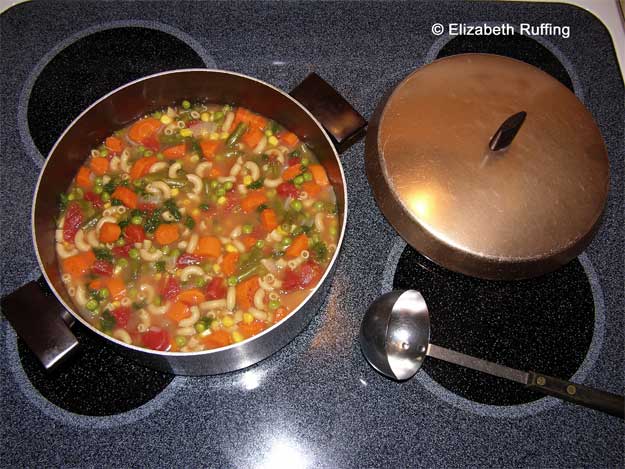 I probably could have used more stock in my stock-to-vegetables ratio. As it is, my soup came out more like a stew, using about six cups of stock. Closer to eight cups might have made it more soup-like, but it was hot and warming, and we were cold, as I said. So, there were no complaints!
Categories: Cooking and Baking, Sewing
Tags: Cooking and Baking, viking-platinum-775 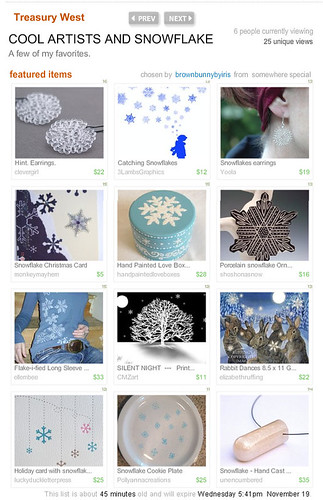 My “Rabbit Dances” print was included in this “Cool Artists and Snowflake” Etsy Treasury today. Thanks, Iris, for including me! I’m thinking of adding some more print sizes over on our website, so that there will be more options to fit standard-sized frames. We stopped at A C Moore yesterday so I could see which sizes were more popular, or available. The most popular smallish sizes are always 8 x 10 and 11 x 14 inch frames. I’ve made the smaller prints on 8 1/2 x 11 since that can easily go in either an 8 x 10 or an 8 1/2 x 11 mat and frame set. I may add an 11 x 14 paper size, and possibly 12 x12, and 12 x16 paper sizes. We have some prints that will fit 10 x 20 as well. I’m still fixing the pages that are on the site, but if anyone is interested in other paper sizes for prints, just contact us. 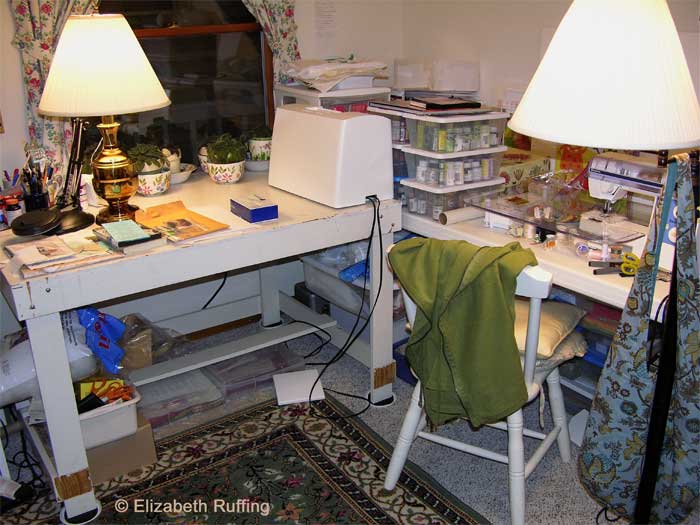 Today I went down a list of miscellaneous things I needed to do that I hadn’t gotten to yet, including cleaning up and vacuuming my workroom. Believe it or not, the above picture is the “after” photo. I should probably invest in a snow plow so I can clear a swath to get in there from time to time. After cleaning, washing, packing, shipping, and I can’t remember what else, I felt the need for some cookies. 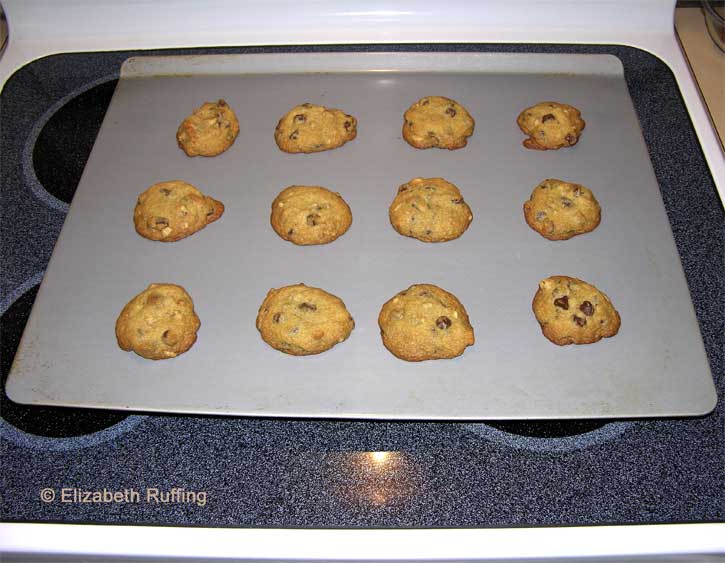 Fortunately, “make some Toll House cookies” was also on my list of miscellaneous things I meant to do that I hadn’t gotten to yet, which meant all the supplies were ready and waiting. So, I took care of that too 😉
Oh, and by the way, when I went to pick up that Interlibrary Loan book that I thought was never to be, it was the wrong book! Too funny. I thought I might be in trouble when I wrote out the title and the author and she said, “Which one is the title?” But then, maybe it was another library that sent over the wrong book. Maybe next time.
Categories: Cooking and Baking, Me and My Studio, Prints and Paintings
Tags: art-prints-and-paintings, Cooking and Baking, Me and My Studio 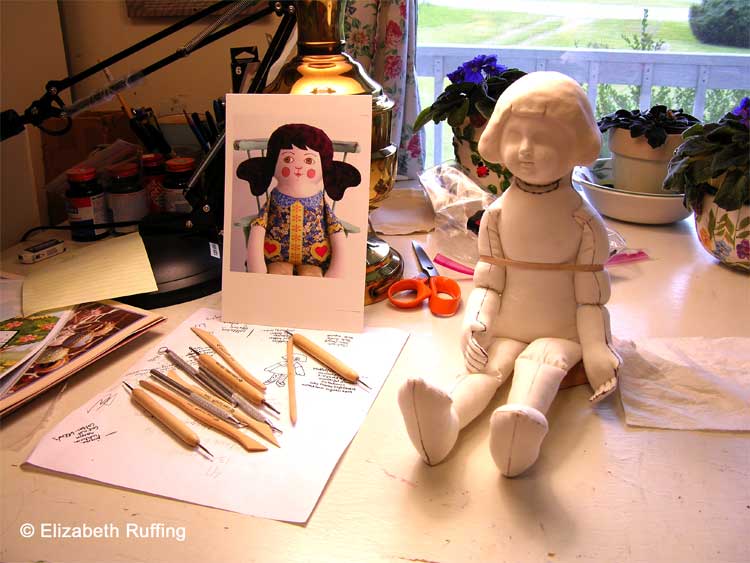 I woke up this morning with an idea that I had had before for a doll. I had put it off before, not knowing where it would fit in, as far as marketing it went. I still don’t know, but eBay has been frustrating lately anyway. So, I decided it didn’t matter if I made a doll I couldn’t include in any of the popular categories there. I wanted to do a more colorful, maybe 1920’s style doll in a more stylized way, as opposed to the antique/primitive style that is more popular on eBay. The primitive dolls tend to be more subdued in their colors, and earlier in their clothing styles. I’m thinking of something more along the lines of my cloth dolls and toys, but as an art doll, for display only. Instead of putting it off again, I decided to go ahead and give it a try. I don’t know where that will lead me. Right now, I am trying a little of everything. 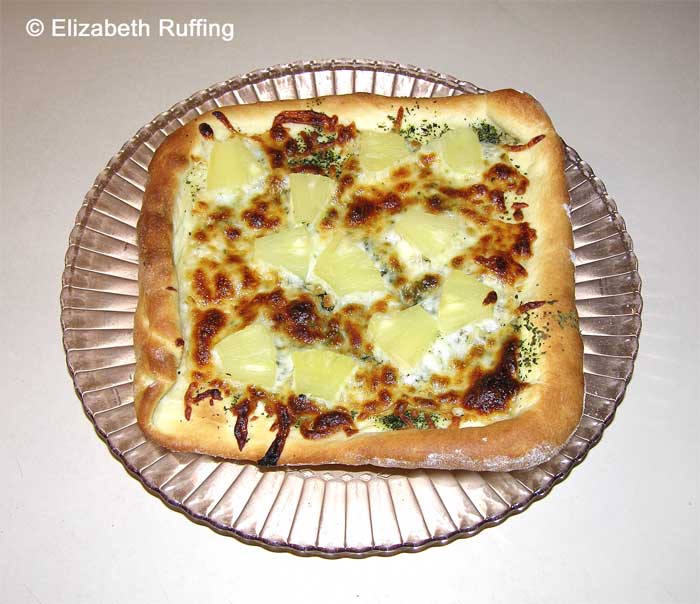 I made some pineapple and cilantro pizza last night. It came out okay. It is much better with fresh cilantro. It’s pretty simple. Take any pizza dough (I used the pizza dough recipe from The Bread Lover’s Bread Machine Cookbook by Beth Hensperger), roll it out, and put it in a pan that’s been lightly coated with some olive oil and cornmeal. On top of it I added some olive oil, mozzarella cheese, cilantro, and pineapple slices (no tomato sauce). I baked mine for 13 minutes at 475, but you’d probably want to follow the directions for whatever pizza dough you use.
I’ve also been sewing up more fleece “Hug Me! Slugs” in different colors. I’ve got a couple of pinks, blues, greens, a yellow, a lavender, and an orange fleece, just to expand the choices. I’ve been amassing a pile of odd supplies lately. That way, I can get up in morning and make just about anything I want!
Categories: Art Dolls, Cooking and Baking
Tags: art-dolls, Cooking and Baking, original-one-of-a-kind 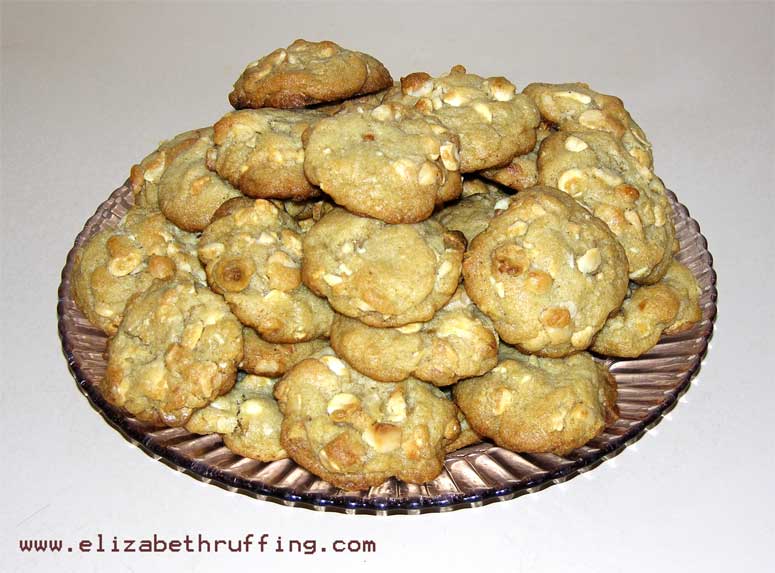 I wanted to try out the cookie-baking tips I read the other day in this NY Times article. I picked the Ghiradelli Macadamia White Chip Cookie recipe from the back of the Ghiradelli Classic White Chips bag. This is the first time I made these, but the recipe is similar to the well-loved Toll House Chocolate Chip Cookie recipe, only with macadamia nuts and vanilla chips. The Times article, among other suggestions, recommended refrigerating your dough for at least 24 hours, preferably 36 hours before making your cookies. I have to say, what they said would happen seems to be true. The nutty flavor seemed to permeate the cookies, along with a nice toffee flavor. They were quite delicious. It was also true that the dough did get a bit dry and crumbly, but I was able to mold it into balls with my hands. I tried to make larger cookies since they said they would be chewy in the centers and crisp on the edges, but I think they came out small because my dough was still very chilled. I’m not sure. They were chewy in the middle and crisp on the edges, just the same. All and all, it was a good experiment.