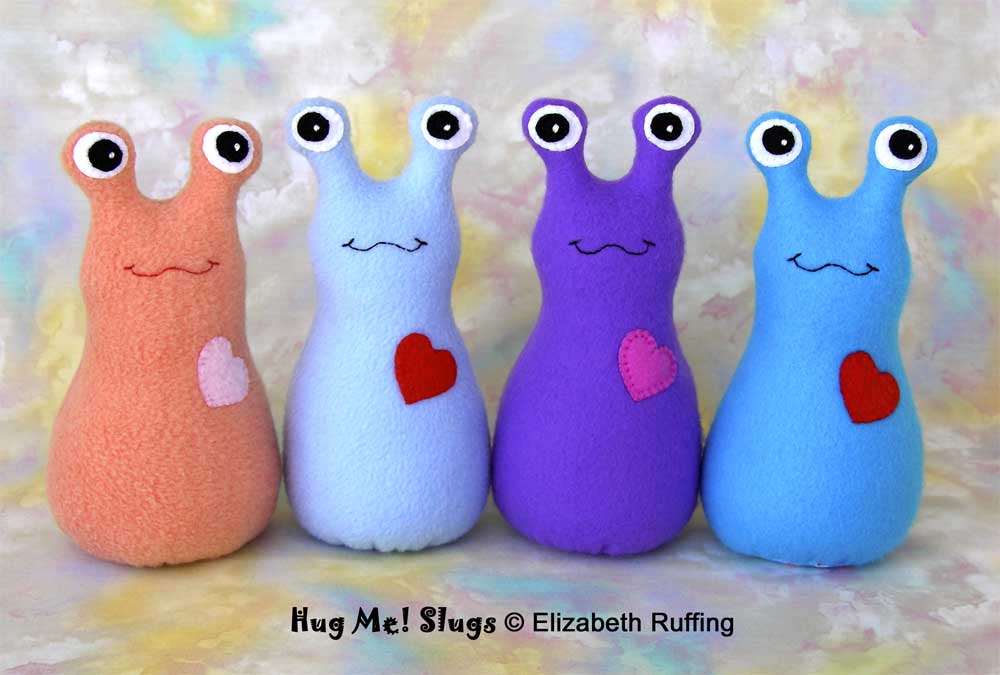 Before I forget to mention it, I finally figured out how to add one of those “Follow my blog” boxes over on the sidebars of each of our blogs, if anyone is interested in joining in. There’s one over on the Ruffing’s blog too. Everyone who uses Blogger seems to have one, and if you host on Blogger, it’s easy to add one by going to your settings. I just don’t happen to have our blogs hosted on Blogger, which made it a little trickier. The “Follow” boxes allow you to easily add blogs to your reader list in Google or in Blogger, so you can check all the updates on your favorites in one place.

I just finished up a small batch of “Hug Me! Slugs” and sent two along their way, off to their new homes. Two others are up for adoption in my Etsy shop, 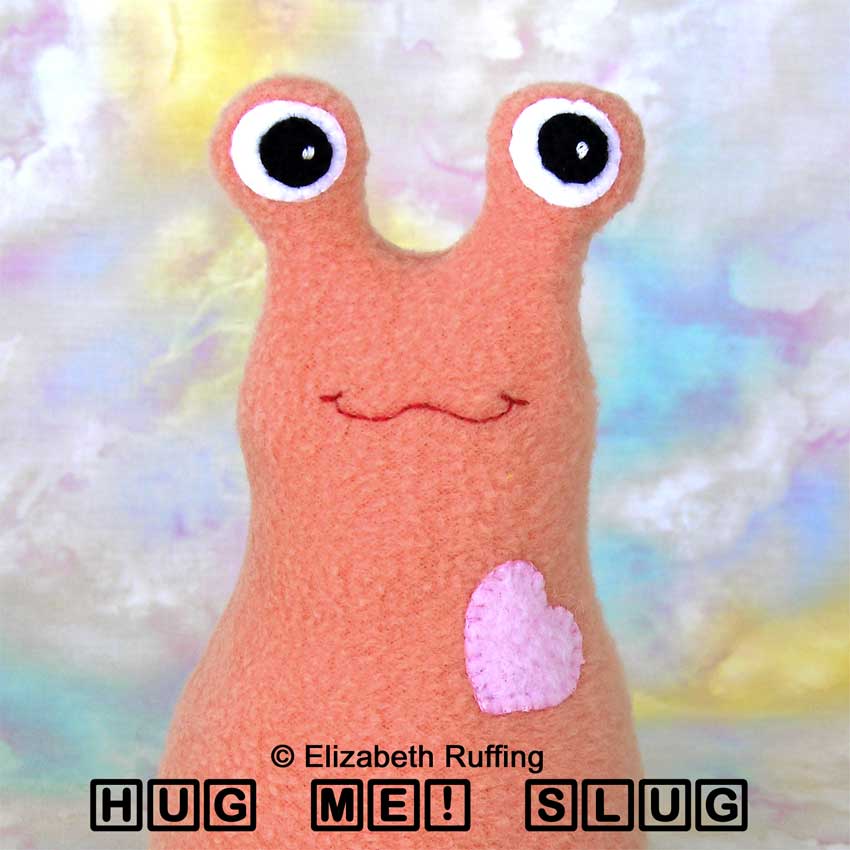 including this soft orange one, and the turquoise-blue one below. I’m letting their new slug parents name them this time around. I still don’t know which people prefer, naming them themselves, or having me name them. I’ve been asked to name a slug here and there, and that’s okay with me too. 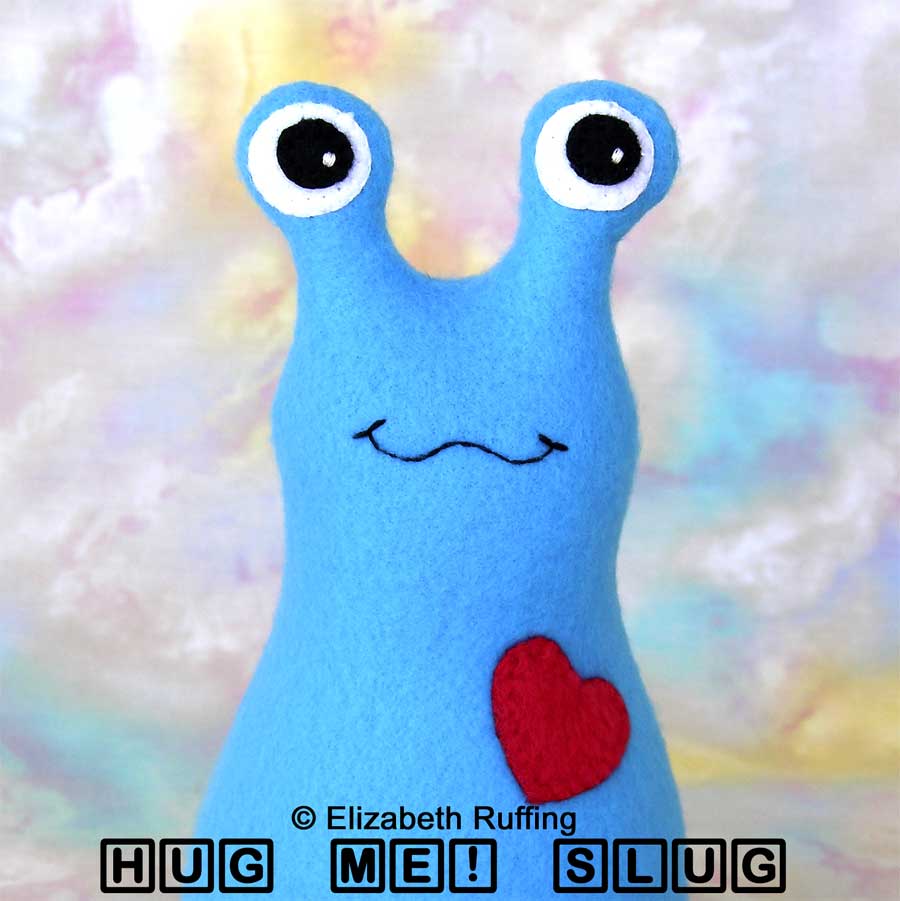 As I mentioned in my last post, I’ve been trying out some ideas for children’s stories, something I used to work at much more, when I had just gotten out of college. I put that on hold for a long time, but I’ve been exploring the idea again. I had thought that once I had children of my own, I would be better able to relate, but since I don’t, I’ve decided it’s just time for me to regress 😉 I’m trying to find my way. 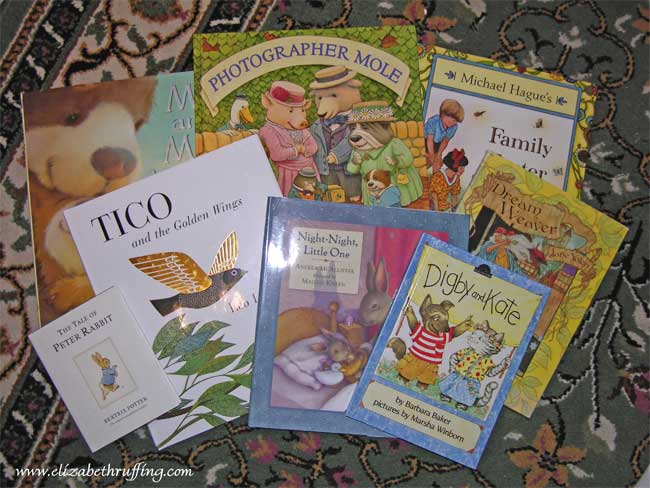 I hit a bonanza of children’s books at the local used book store, after Christmas. People must have dropped off books of which they already had copies. I found quite a few that are very charming. I wanted to see what other people were creating, and I do pick up ideas that don’t always occur to me when I write, like adding dialogue and action! I tend to do a lot of describing when I write, and so it is good for me to be reminded to take off in different directions like that sometimes. 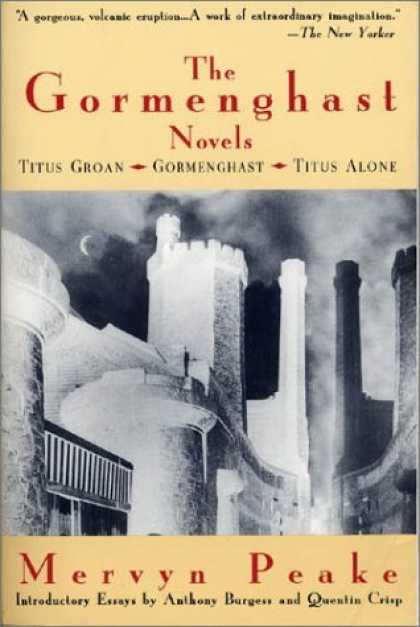 I’m also very much enjoying reading The Gormenghast Novels by Mervyn Peake right now. I just finished the first one, Titus Groan. There was a wonderful miniseries, also called Gormenghast, based on the books on PBS years ago. They are surreal, imaginative fantasy-type novels, but not the kind with magic in them. They are wonderfully odd. 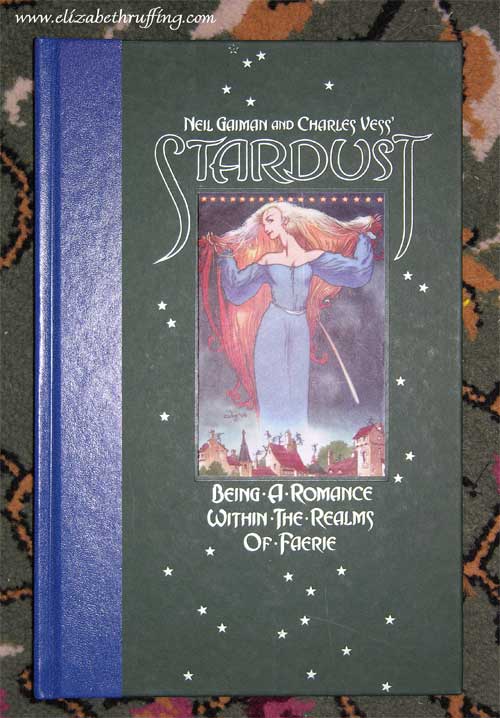 While reading the Gormenghast trilogy, I started thinking of another fantasy novel I read a couple of years ago, Stardust. It had been a Valentine’s Day gift that was, well, ungifted. You know how sometimes people get you a gift that is really for themselves? Well, I decided to just get my own copy on eBay. It’s not new like “my” other one, but I’m pretty sure I get to keep it. It’s also illustrated, kind of like a children’s book, but it’s more for adults. 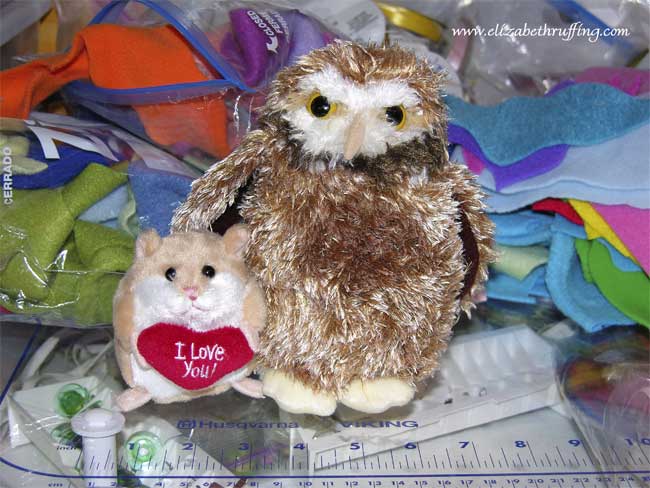 And, I have two new friends. These are my new hamster and my new owl. They’re watching over my pile of fleece that I use to make hearts and eyes for my own creatures. I think the hamster loves me. That’s what he says anyway. 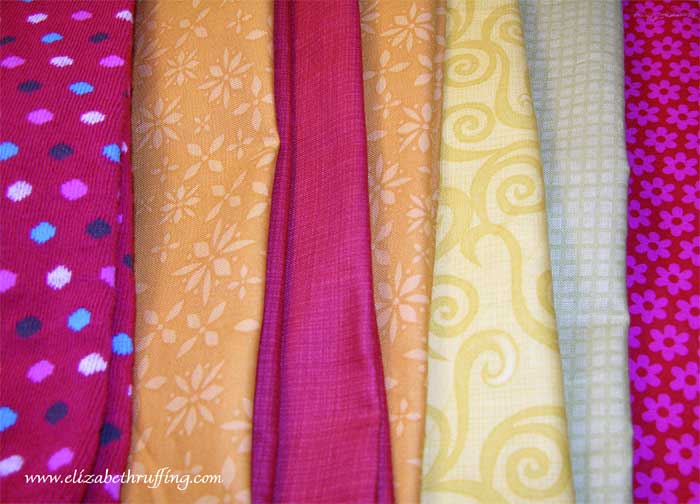 I have a few new fabrics on my table waiting to be prewashed too. My sewing machine is still…can you believe it?…in the repair shop. It took the Husqvarna Viking company two months just to send the part that needed to be replaced, and now the man who repairs the machines is sick. This isn’t making me happy with the Viking company at all. I’ve written to them about that, and about some problems with my warranty, which they aren’t honoring since I bought my machine over the Internet, even though there’s nothing about that in the language of the warranty. I’ve had some questions for them about Internet sales, and where sellers are getting their supply of machines to sell, if they aren’t sanctioned by the company. I’ve gotten nothing but a very apathetic response from them, which is giving me a bad impression of them.

It’s just so sad, depressing really, that companies don’t seem to try to do right by consumers anymore, or to protect them. We’ve been talking about getting another sewing machine, for backup, but it’s so hard to decide what brand to even go with anymore. You pay more for the “top of the line” machine brands, and then, when they don’t really give you better service than you’d get anywhere else, you just feel like everyone is trying to take advantage of you.

I guess you just try to do the right thing yourself, and the best you can do. I know it’s not enough for me to not do my best with anything that I make or sell, and I know it’s important to me that people who receive things I’ve made are happy with them. I just wish we could all feel like we’re being treated fairly, and with respect, in every interaction we have with other people, business or personal. I get very discouraged sometimes about things like this. I’m so glad I have the opportunity to work on my own, and have as much control as possible over what I do.

Our hearts go out to the people of Haiti right now too, and to their families wherever they may be.