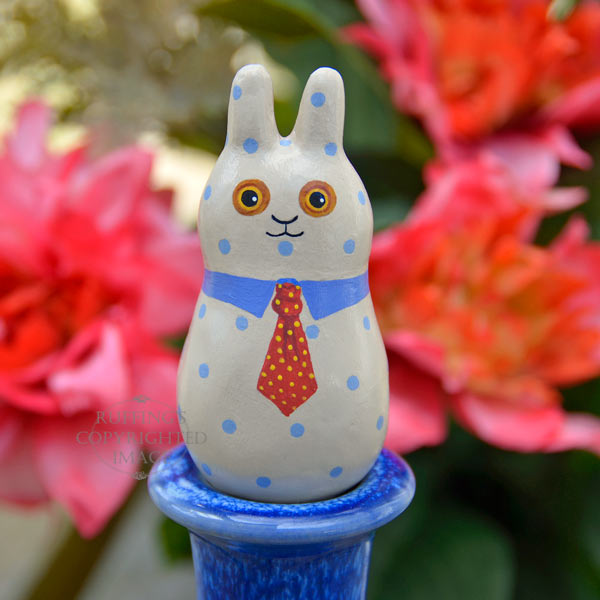 Jefferson looks wide awake with his golden-brown eyes that have soft yellow rings toward their centers. He is tan with blue polka dots, and wears a red tie with tiny gold polka dots under his blue shirt collar.

Jefferson’s personal mission is to find the famous “bunny trail” from the Easter song…the one that Peter Cottontail comes “hoppin’ down.” He researched giant volumes in the library and combed the Internet for information.

Thinking he found a lead, Jefferson took a picnic lunch to his neighbor’s yard, so he could spend the entire day looking along a path that goes into the woods behind his house, but there was no sign of that “Bunny Trail.”

Weary of searching, Jefferson sat on a log, unpacked his brown paper bag, and ate his carrots and lettuce. Then he sighed, yawned, and vowed to set out on his quest again tomorrow.

Jefferson is a handmade miniature original one-of-a-kind rabbit art doll figurine. I hand sculpted him from paperclay over wood, in multiple stages, to allow for drying and detailing. I painted him by hand, under a magnifying light, with tiny brushes, using acrylic paints. Jefferson is signed and sealed with gloss varnish for protection and preservation.

He is a work of art meant for display only, and not for play. I am including a certificate of authenticity with him. 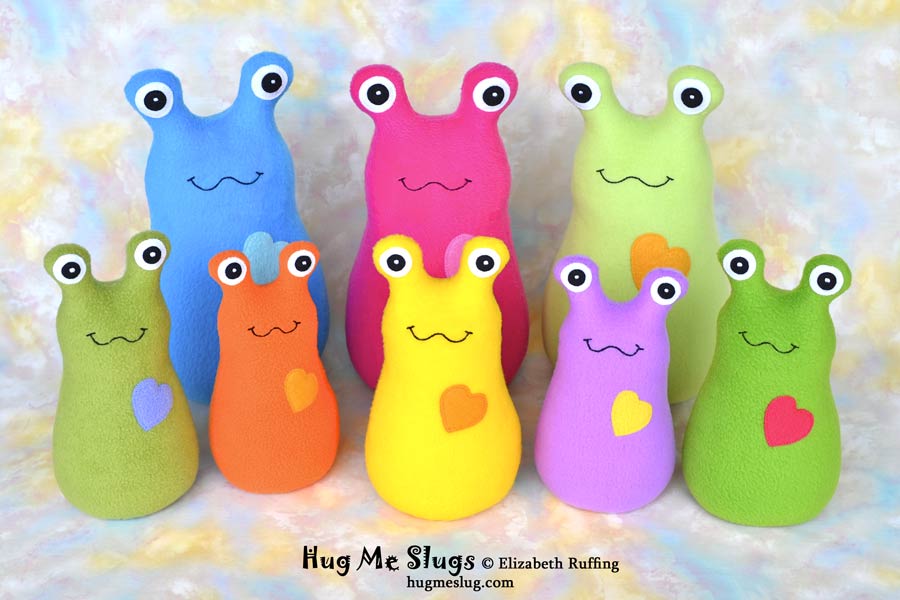 I have an array of Hug Me Slugs up in my toy shop, in a variety of sizes. It made me feel better to see them smiling at me.

I will keep working at getting more up, along with some other creatures.

I went out and picked up some supplies. I was surprised by how much the prices went up. I got what I needed on sale, but the regular price for this many glass-headed quilting pins, two packs of the kind I like to use, would be $17.98! And my stuffing is now at $11.99 a bag. Even on sale, they are still expensive.

Temperatures here are running between 95 and 101 degrees, but we had appointments for two strays, who have been showing up at my neighbors’ houses, to get them fixed and vaccinated. I only have a couple of photos, from afar, this handsome guy. He looks like Sasquatch peeking out from behind that tree.

I have been leaving food out for a week, in a trapping spot, and tried to trap from before 6am until after 10pm in the heat, with no luck. His friend, a gray-and-white cat, was next to the trap at one point during the night, but it was the moment I went to check the trap. He ran away.

The rest of the day was ridiculous, with one extremely talented girl kitty, a neighbors’ pet, who was an expert at cleaning all the food out of the trap, without stepping on the trip plate. She even carefully licked it off a piece of cardboard I put over the trip plate, to make the area more sensitive. I would come to check the trap, and it would either be open and empty, or closed because it had been jostled.

Then there was food that was left out, when I needed everyone to be hungry. It was hopeless. I got very tired, sweaty, and frustrated. Another kitty is going to take the second vet appointment, after the first had to be canceled. We will wait until the heat breaks, and try again in another spot, with the snack thief inside, I hope.

During my trapping fiasco, these guys got into a fight again. This time, I went inside and got a bowl of food to break it up instead of risking getting bitten. Santana reluctantly gave in to the food.

Trouble likes to follow me around. Trouble is the black-and-white cat’s name. Santana sees him as a rival. I didn’t see Santana on the other side of my dad’s car, when I said hello to Trouble, who had followed me home. This seemed to set Santana off again. I think Santana gets extremely jealous. He jumped on Trouble and fur was flying again. Trouble seems fine. Santana was limping a little. I didn’t get bitten.

Both belong to neighbors. I think they will eventually sort it out. This has happened with other neighbors’ cats and they adjusted. I like them all, and so I hope they can be friends. Most of the time they seem to tolerate each other.

I was done in, and didn’t want to even go outside or talk to anyone after all that. Oliver Bunny helped calm me down. He has been relaxing in the heat, with the air conditioning on, sometimes by himself, and sometimes with friends.

I don’t quite trust these two tabby girls with him, but they are very insistent about having bunny time. Oliver is popular and interesting. He is also brave. If they bother him, he grunts at them and I go shoo them away.

When he wants to be left alone, he stretches out next to the toilet, which is cooler.

He used to eat dandelion leaves, but he has been boycotting them. Instead, he has been eating huge amounts of cilantro. He is being picky. I got him some green leaf lettuce, and he didn’t want that either. Romaine is okay, but green leaf, not so much. He wants cilantro, carrots, and most of all, his banana slice in the morning. Banana slices make him very happy. A friend suggested he needs his own banana tree. I said he needs a tiny banana tree, that grows one slice at a time. He is little.

I am going to go get some bunny time, and some toy time in, and hide for a while. Tomorrow is Father’s Day. Happy Father’s Day! We will be having cake. 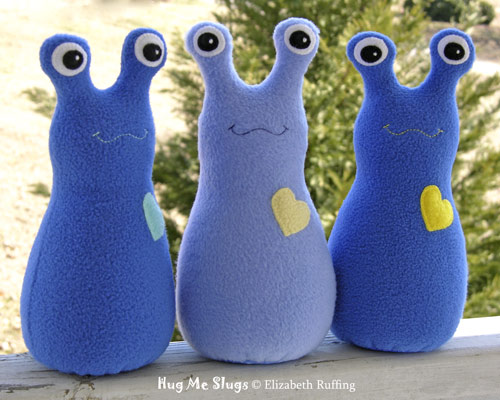 The last one of this year’s Valentine’s Day Hug Me Slugs left on his way today. I’m assuming he’s the last anyway, unless someone asks for one of the ready-made slugs before the holiday arrives. I will be posting my new handmade stuffed animal toys in our Ruffing’s shop. 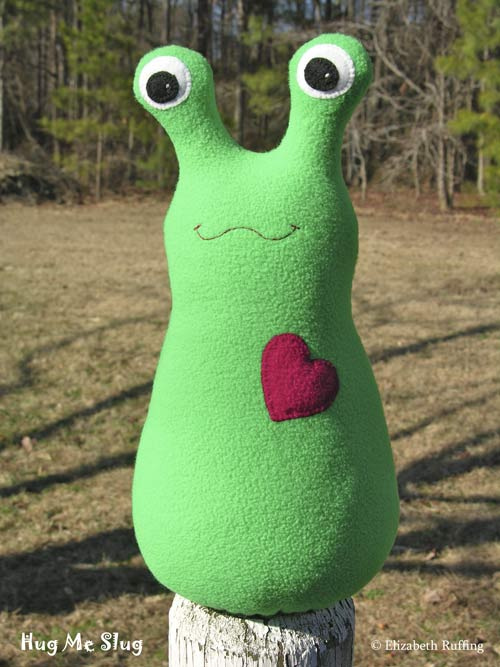 I’ve been juggling a bunch of toys at once for the past two weeks. I have one sock kitty to finish up as well, for a very nice lady who has been very patient. I never know how many people will ask for toys at once, and sometimes I’ll think I have only one to make, and then, suddenly, I’ll have a rush. I try to get them all started, and work on them each, a little at a time. 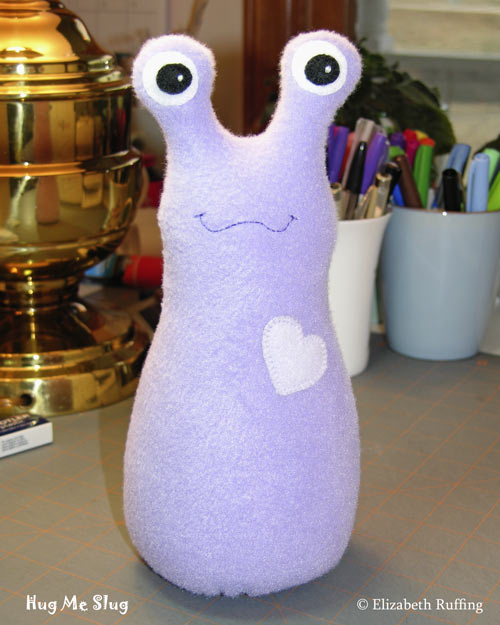 I keep waking up with pictures in my head this week, and so I sketched one when I woke up in the morning. and another the other day. This bunny is still roughly drawn, as I drew her before I even had breakfast today. Maybe I’ll fiddle some more and see where this goes. I’ve been thinking of trying digital drawing, or at least digital coloring. Not sure yet. 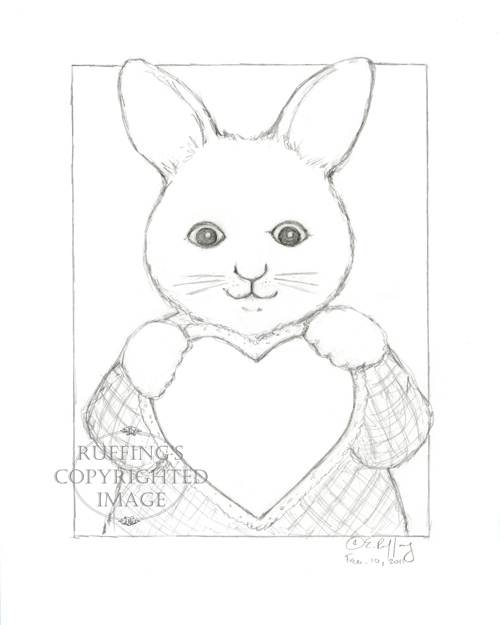 On Monday night, I went to see Feral Cheryl at her new job as a Demo Cat. She and Princess Marie did a great job, showing how to trap feral cats to be spayed/neutered and returned to their outdoor homes. I may tag along later this month for a real feral cat trapping. 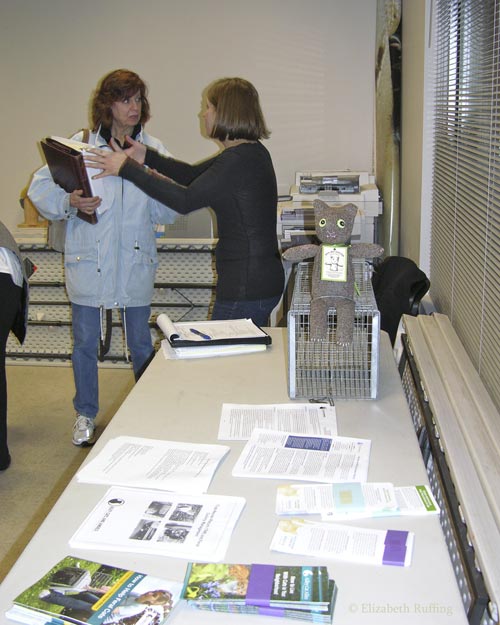 This is Cheryl sitting on a Tomahawk Live Trap, one of the kinds of safety traps the rescue uses. Some also use Havahart and Tru-Catch Live Animal Traps. I learned in the workshop that the kind of trap you use is important, for your own safety too, because poorly-made traps aren’t secure.

Food is put under the trap, on a paper plate, and squished through the bottom grate, or a little is put inside, to entice feral cats to come inside, and once they are in and step on the trip plate, the door closes behind them. They are then left in the trap, with a blanket to cover them, while they wait for their vet clinic appointment. They can’t eat the night before their spay/neuter surgery, and so no food is left inside. 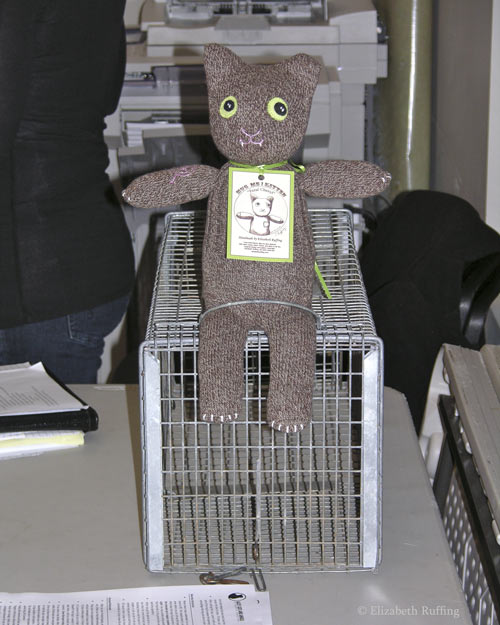 Please spay and neuter your pets. Princess Marie made the association between having several unneutered cats in your neighborhood to having a time bomb, because within just 63 days, they can each have a litter of kittens, which is a situation that can quickly become out of control. Please contact local rescue groups in your area for options available to you, and please spay and neuter any pets you may have.