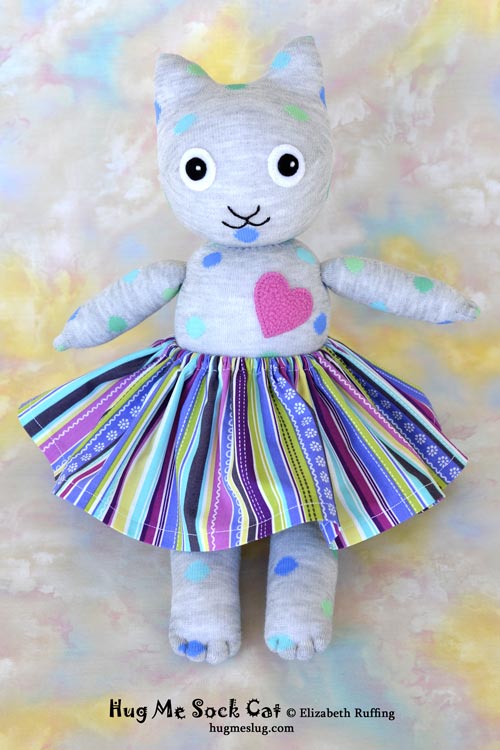 I posted the first of several stuffed animal sock kitty cats with skirts over in my Etsy toy shop toy at hugmslug.com. This one is gray with blue, light green, mint green, and light turquoise polka dots, and a mauve pink fleece heart. Her skirt is striped with blue-purple, light turquoise, yellow-green, magenta, purple, gray, and white. Her skirt is 100% cotton and has an elastic waist. It is fully finished and is removable for dress-up.

I also recently posted a dozen plush fleece Hug Me Slugs for adoption too. I have some 12 inch tall ones and some 9 inch tall ones, in assorted colors. If you happen to be on Facebook, and haven’t yet, please come “like” Hug Me Slugs and Friends’ page. I try to post my new toys there at the same time I post them on Etsy or on eBay.

I have four more sock kitties waiting for me to finish their skirts, and I have just finished two Hug Me Puppies. I just need to draw their puppy dog portrait for their hang tags and then I will be posting them. 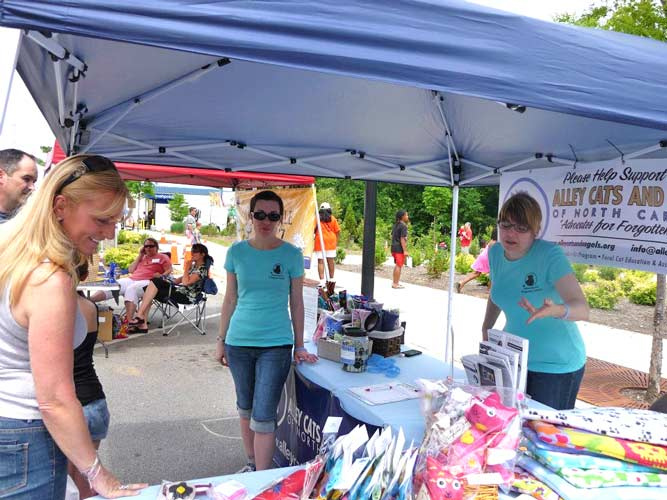 I borrowed these photos from Alley Cats and Angels rescue of NC, to show you my toys at the festivals this past weekend. They visited Peak Fest in Apex, Meet in the Street in Wake Forest, and OutRaleigh in Raleigh. Thanks very much to everyone at Alley Cats and Angels for taking them along and spending so much time and effort. 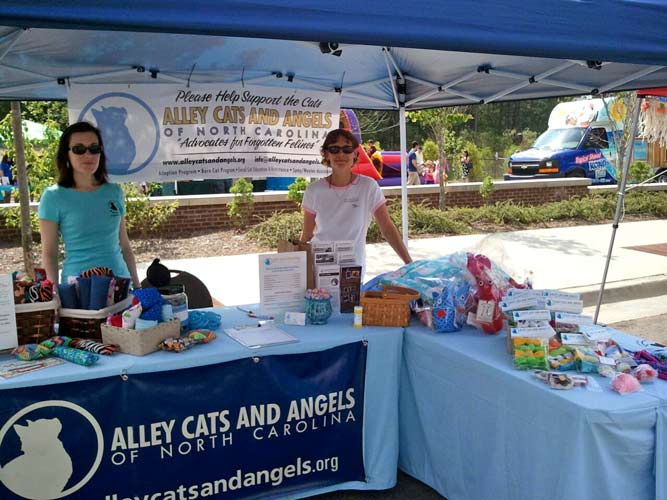 The rescue also had cat beds and catnip toys there, which are still available from them. They use potent catnip. Our cats love the toys they got. They are all handmade by volunteers. 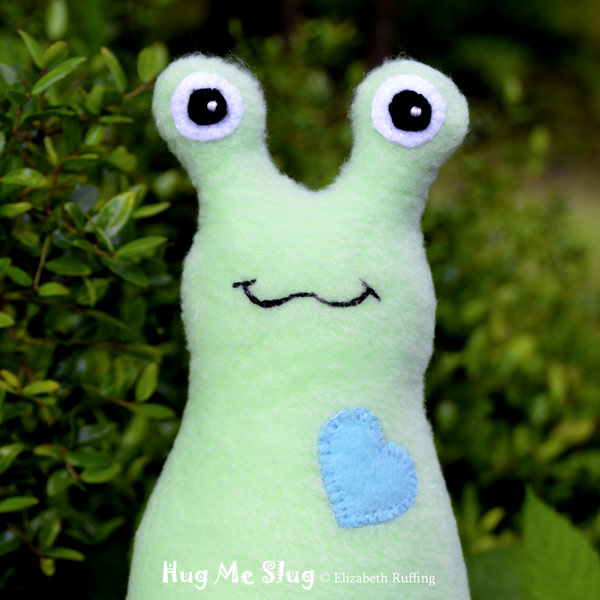 I currently have some more toys with portion going to animal charities as well. I will be posting new toys in our Ruffing’s shop. 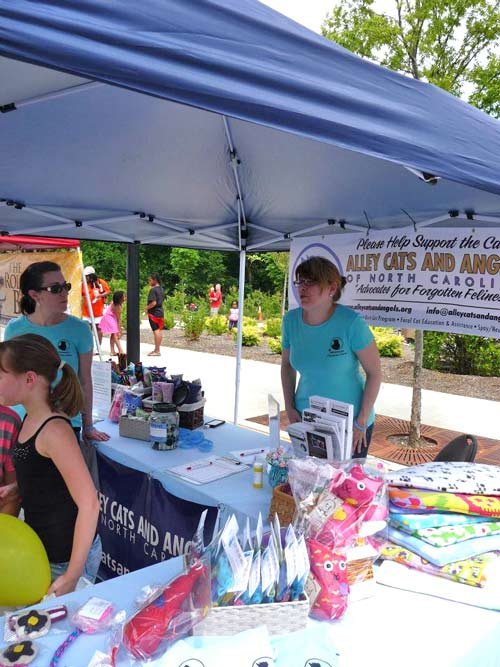 Most of these are from Meet in the Street, in Wake Forest. The one below is from OutRaleigh. The banner says “A cat’s love knows no gender or color.” As most have probably heard, North Carolina has been engaged in a heated debate over Amendment One, which is an embarrassment to a great many of us, including me. I wish people would learn to leave each other alone. Why is that so hard? It’s something I’ve never understood. I find it so upsetting. 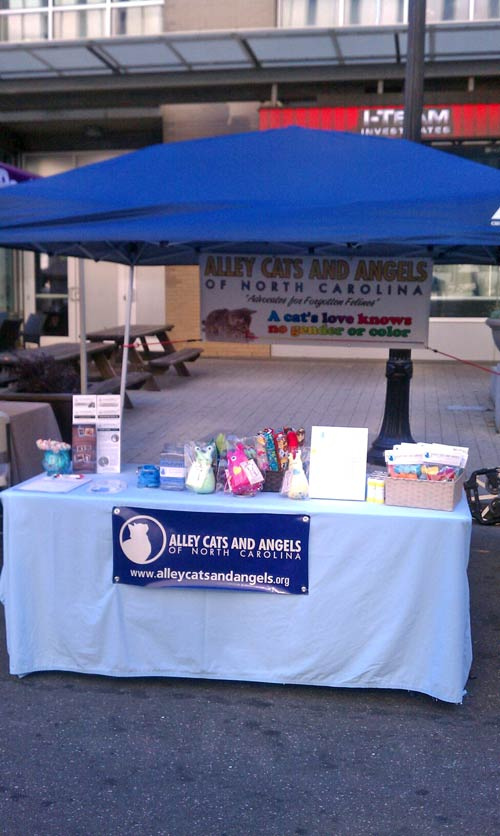 I admire people who spend their lives trying to help other people and animals and the world around them. I don’t have tolerance for those who try to inflict harm. Just think how much better everything would be if people spent their time thinking of ways to help, and acting on those ideas, rather than spending their time attacking and hurting each other. I wish there were more kindness being expressed. All the hate and anger sickens me. 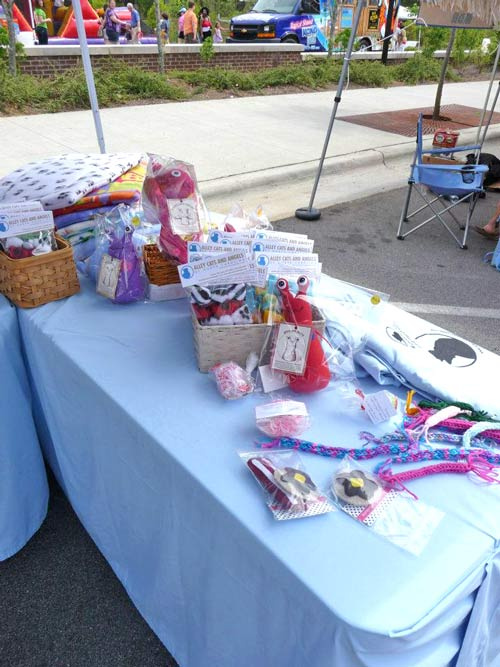 I try to surround myself with positive, supportive people. And I try to recognize the negative, poisonous ones and get away from them as fast as possible. A friend gave some valuable advice saying it isn’t worth spending any time thinking about people who treat you in an uncaring way; just get away from them and don’t look back. I think that goes for people who treat others in an uncaring way too. 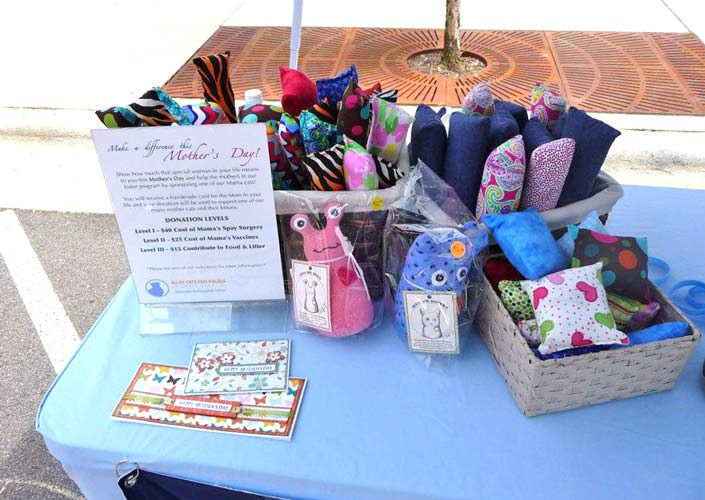 Thankfully, there are people who do care, and do spend their time doing positive, generous things. I’d rather focus on them. 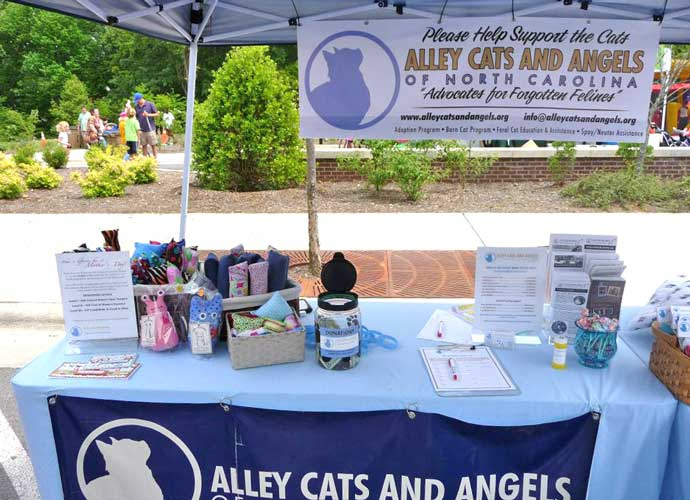 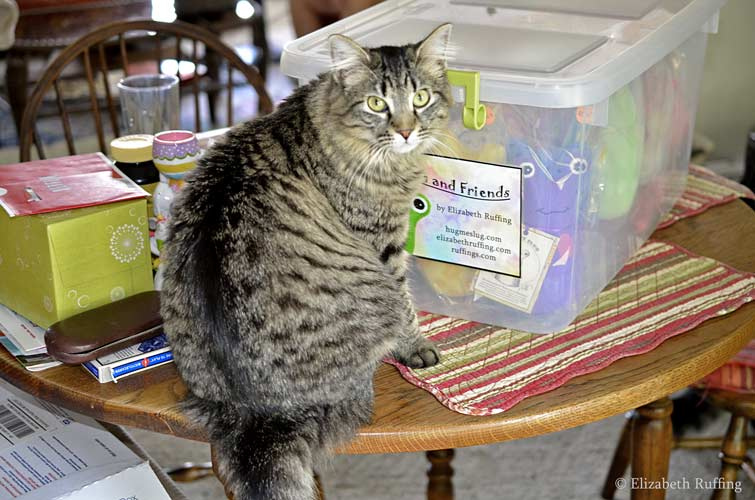 Some of my toys are going to the Cleveland Strawberry Festival in Clayton, NC tomorrow. This is the first time I’ve tried them out at an event. It’s their first time out of the house too 🙂 They’ll be at the Alley Cats and and Angels booth. 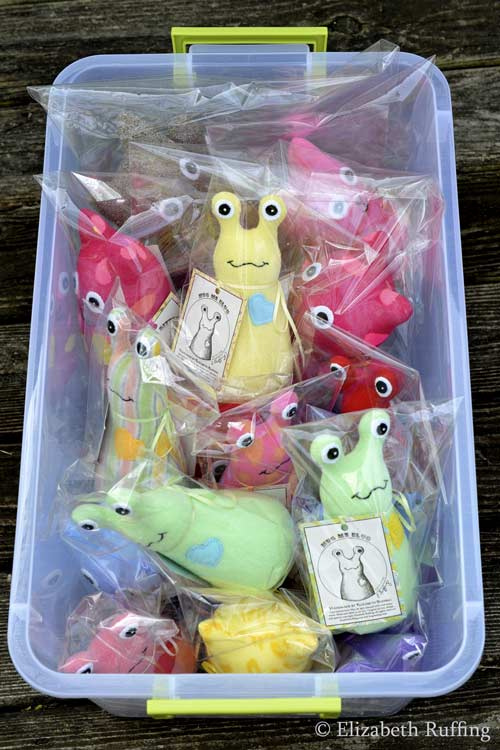 I put them in cello sleeves to keep them clean, and fit as many as I could into the bin I got. I made a whole lot of tags for them, not knowing how many I’d need. I had picked out almost again as many toys as are in this box. 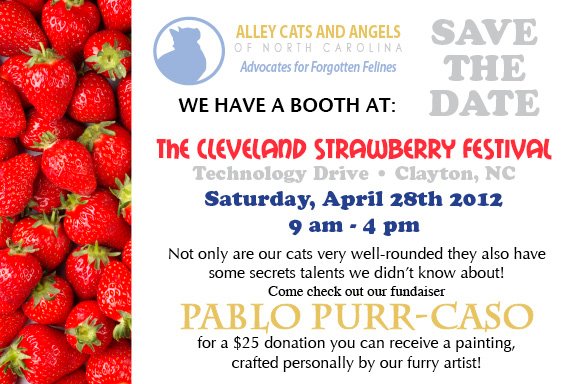 $10 from the sale of the Alley Cat Angels, $5 from the Hug Me Sock Kittens, and $5 from the 7-inch Hug Me Slugs will go to Alley Cats and Angels of NC to help cats and kittens in need. 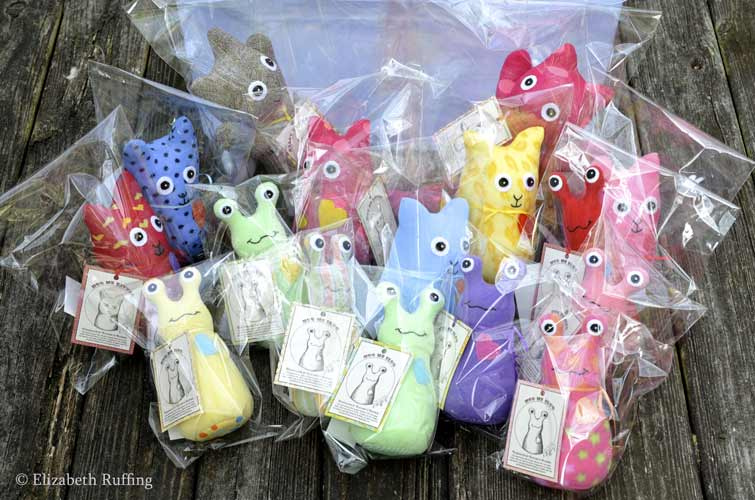 Please come out if you are in the area.

I made this little sign for the side of my box. 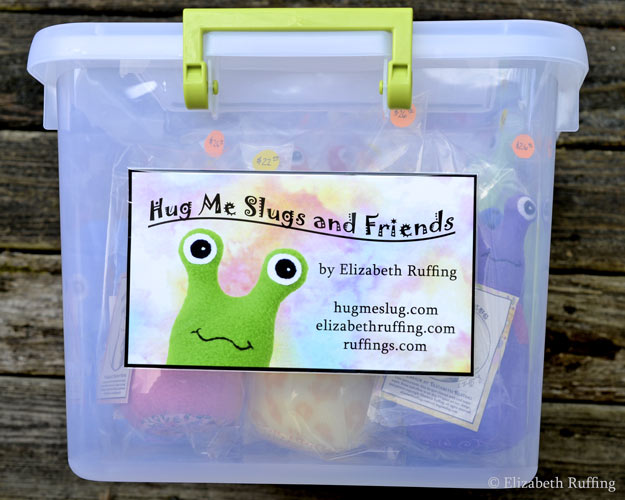 There will also be catnip toys (kickers, cigars, and pouches), cat beds, and cookies, all made by volunteers, at the rescue booth. These cigars are a big hit in our house. (I borrowed these two photos below from the rescue.) I have to get some more of those. 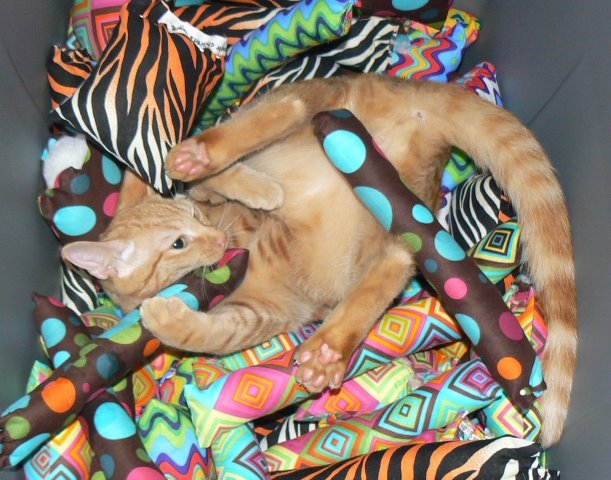 They made a huge number of catnip knots, and put them all in cello sleeves with tags on them. I gave them a PDF of the tags I did before, along with some cello sleeves, and they came out nice. Very cheerful. 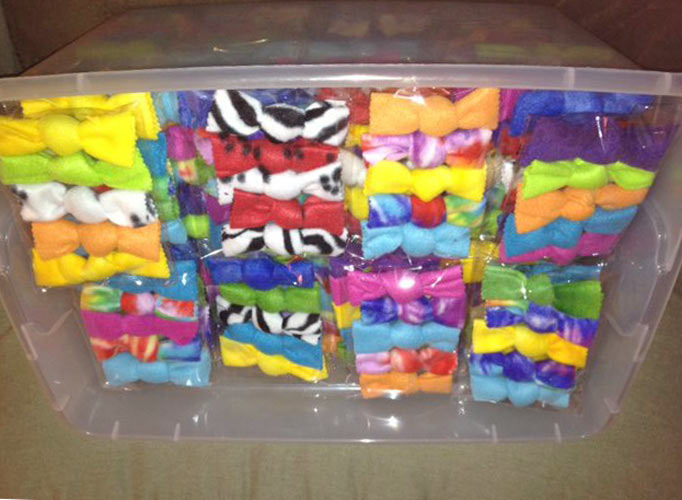 Hope you’ll come out and have a look around. 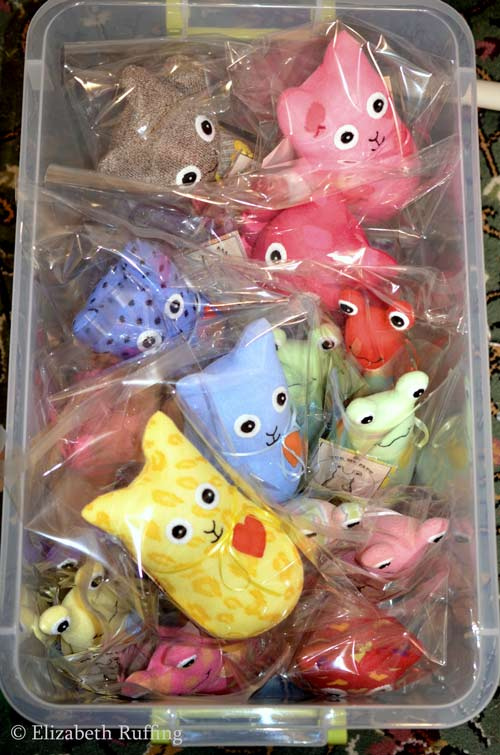 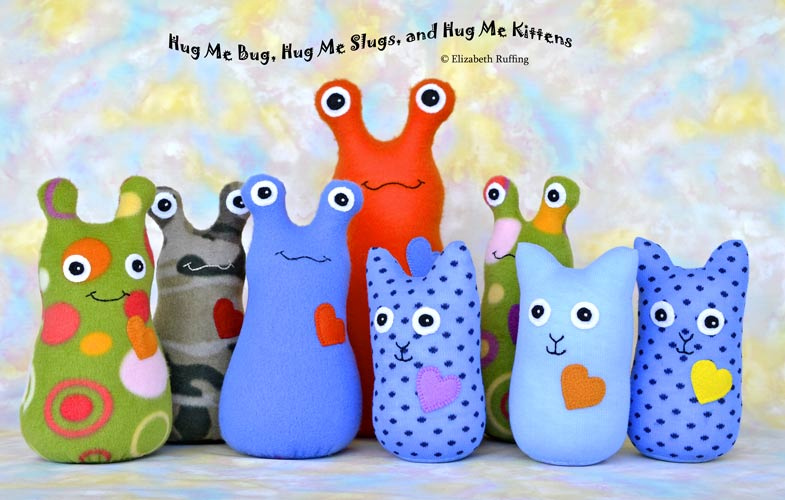 These fuzzy handmade stuffed animal Hug Me Slugs, Hug Me Bugs, and Hug Me KIttens are up. I am posting my new stuffed animal toys in our Ruffing’s shop. As as of this afternoon, 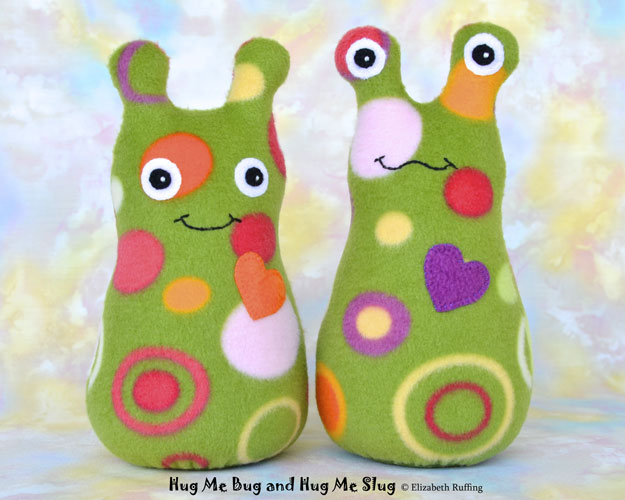 I have one Hug Me Bug, some Hug Me Slugs, and Hug Me Sock Kittens too. I have plenty more to come. I’ve been watching movies, while hand sewing. I watched a particularly cheesy bunch of bad horror movies the other day. 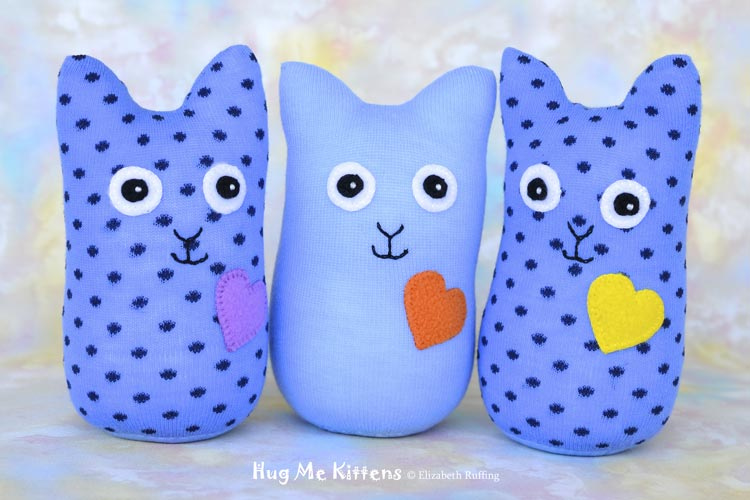 I’ve been trying to fit in going out to lunch at least once week too. On the way home, I often end up with strawberry cupcakes from The Fresh Market. These are wonderful. I have to find some chocolate ones. There are many temptations there. 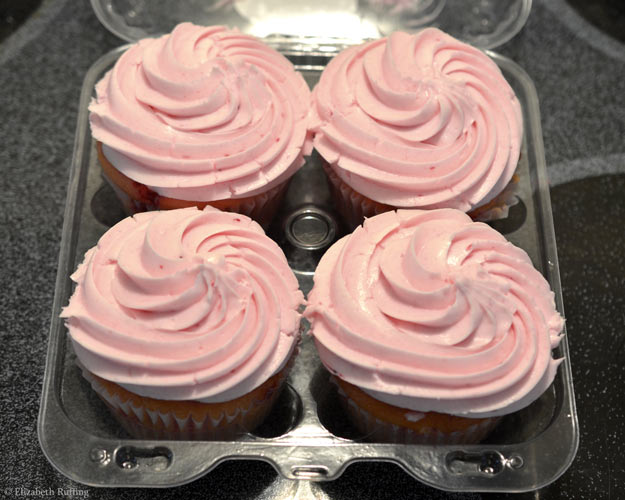